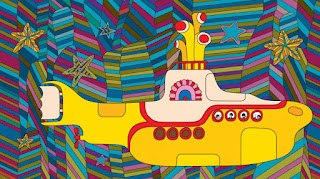 We all live in a Yellow Submarine, a tub of margarine, a hoose in Aiberdeen! YouTube Music will exclusively host The Beatles’ animated Yellow Submarine film as a Sing-A-Long TODAY on YouTube...


The Beatles’ “Yellow Submarine” Sing-A-Long was released in theatres in 2018 to celebrate the film’s 50th anniversary and has not been available since. The acclaimed film includes some of The Beatles’ best known songs, including its title hit, "Eleanor Rigby,” "When I'm Sixty-Four,” "Lucy in the Sky With Diamonds,” "All You Need Is Love,” and "It's All Too Much."

The beautifully restored film’s Sing-A-Long version includes song lyrics at the bottom of the screen for the whole world to sing along together (should they want to). We'll let Ringo explain more...