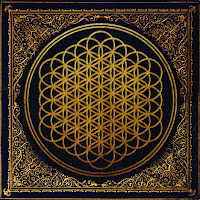 In an effort to further her musical education, Susan Omand has been set "homework" of listening to albums released after the 1980s that she has missed out on. This week it's always Sempiternal...

Now this is a band I remembered from last year (see that review here), not least because of the reaaaaaaaa *breathes* aaaaaaaally long album name. I also seem to remember that I quite enjoyed it despite being told, and I quote, “I have a feeling you are going to despise the next one”.

Bearing all that in mind I dived into this week’s Educating Omand suggestion…. So let’s go track by track shall we?

Can You Feel My Heart – I love this. There’s still a lot of melody in the, now expected, shoutiness that works really well. Also I love the electronica which gives it very much a Babylon Zoo sound. But the thing that captured my attention from the off was the melange of rhythms that really should clash horribly but just… work. It’s jazz by any other name and is brilliant.

The House of Wolves – Much more thrash metal sound again to this one, with excellent dirty guitars and frantic percussion. The vocal from Oliver Sykes also comes into its own again. I don’t know how he manages to keep a melody going with the amount of “gargled with nails” shouty he puts into his performance but he does. The chorus of this one is the hook for me and I found myself humming the “brick by brick by brick” leitmotif for the rest of the day.

Empire (Let Them Sing) – the momentum is continued with this track. I really like the “tribal” aspect of the voice just over percussion in bits and the call and response aspect which would be brilliant to hear at a live gig. The electronics also travel around the stereo speakers/headphones in a marvellously disorientating way.

Sleepwalking – Sleepwalking annoyingly reminds me of something else but I can’t remember what it is (I only have a single riff and a line of lyrics that, in hindsight, I may have made up). Anyway, this one is just ok as a song, lives down to its title a bit, and its commercial sound explains why it made it high up in the UK rock singles charts at the time – maybe that’s where I heard it? Doubt it though.

Go to Hell, for Heaven's Sake – This has a real Celtic feel to the percussion and would be fantastic live as it has a real sing along catchy chorus.

Shadow Moses – The instrumental intro and outro to this is beautifully ethereal and is darkened dramatically well with the thundering bass when it kicks in. There’s also a nicely disconcerting electronic whine in bits and again, it travels round the speakers in an interesting way.

Seen It All Before – This is the first song on the album where I’ve actually taken heed of the lyrics and they are pure poetry – “I’m drowning in the deja-vu” is incredibly evocative.

Antivist – Antivist sweeps all the schmaltzy lovey dovey poetry stuff out the window again and is basically the Beastie Boys meets Motorhead and is all the better for it.

Crooked Young – The orchestral start to this is completely unexpected but it works very well with what follows as there’s lots going on. Interesting biblical quotations slid into the lyrics too, along with a Pink Floydian children’s choir.

Hospital for Souls – I love the start of this! The electronic samples are very Orb-like, flowing through orchestral, to full on metal to stripped back vocals, it’s hard to pigeonhole (always a good thing in my book) and an interesting way to close out the album.

So, all in all, a really good album. Am I educated? Yes, I’d say so. It’s good to listen to something else by a band that the Educating Omand strand introduced me to last year and even better to find it enjoyable. Nothing that I absolutely hate, not many that tick the wallpaper muzak box (probably just Sleepwalking, really) a few that I think would be even better live and several contenders for favourites. I do keep going back to the first track on the album though because that rhythm counterpoint is absolutely fascinating.