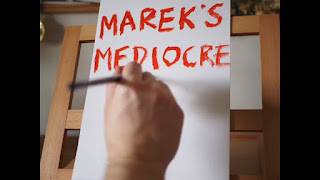 If you're looking for something suitably arty-ish, surprisingly informative and incredibly entertaining to start your week, Susan Omand suggests you indulge in a few of Marek's Mediocre Masterpieces...

"Whose Mediocre Whatnow?" I hear you ask. Well...

A couple of weeks back I was doing my usual rabbit-hole-falling-into on the interwebs and I happened upon the YouTube stream of one Marek Larwood in my "Recommended for you" algorithm thingie (tech term). Marek's website (http://www.mareklarwood.com/) describes himself as "The greatest actor of the 21st Century" and, while I would not yet dare to dispute that bold claim, I feel that he is doing himself a dis-service by not also claiming to be "The greatest mediocre artist of the 21st Century" too.

You see, what he's doing just now is making short videos where he recreates incredibly well-known works of art using his acrylic paints on cardboard. Start to finish in fifteen minutes. Timed.

And they're bloody brilliant.

OK, the paintings may not be the most technically skilled, although you can see that he is definitely getting better with practise and you can absolutely tell what the paintings are meant to be when he's finished. But these wee videos are about far more than just the mediocre painting, as you do actually get nuggets of proper information about the original artist and the work, and the fun of the question of the day in among his laugh out loud running commentary as he rushes to complete complex paintings in his self-imposed timescale.

He has so far tackled masterpieces like Vermeer's Girl with the Pearl Earring, Edward Hopper's Nighthawks and Turner's famous The Fighting Temeraire among many others and I urge you to seek them all out (here). The videos themselves are only 5-ish minutes long, although, due to popular demand (i.e. someone didn't believe he had done it in 15 minutes) his Lichtenstein work also has the full 15 minute unedited version available too.

Now's the time to get on board with the work of "The greatest mediocre artist of the 21st Century" too, as his paintings are now selling for thousands [of pence - Ed] on art auction sites [EBay - Ed] and, in years to come, you can say that you liked his artwork before it was cool/ ironic/ retro/ pretentious to do so.

Anyway, here's my favourite of the mediocre masterpiece videos he's done so far -  Oh, and remember to watch til the end of every video to see the gallery of viewers' art attempts and to listen to the song, a different one for every painting.

You can find all of the mediocre masterpieces so far on Marek's YouTube channel (which you really should subscribe to, to get told about more when they become available) and follow Marek on Twitter @MarekLarwood