Turn That Noise Down - Kris Kristofferson 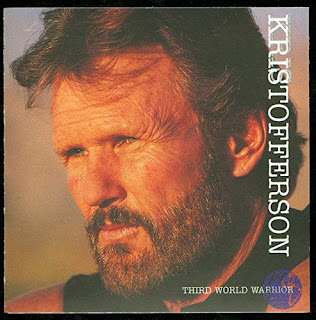 So many well-known albums turn 30 this year and Steve Taylor-Bryant and Susan Omand travel back to 1990 to revisit some of the sounds of their youth that made parents shout "Turn that noise down!" This week, Susan turns Third World Warrior...

“Don’t let the bastards get you down.”

Hot on the heels, literally, of the Highwayman 2 album which came out the previous week thirty years ago [yes, that one. It's almost like we plan this - Ed], Third World Warrior appeared from Kris Kristofferson and, well, bombed.

Kristofferson has always been one of the more political country singers. Not often content with the usual type of “my girlfriend left me, then the dog died and now my whisky bottle is empty” melancholy melodies, he has always been on the warpath in one way or another, standing up for what he believes in. But nowhere was this more evident than Third World Warrior.

It has been said that Kristofferson is one of the best songwriters ever and I would agree. With songs about Mandela, about the Sandinista rebels and the Reverend Jesse Jackson (a cracking song featuring Kristofferson’s pal Willie Nelson), he was not subtle about where he stood on (at the time) highly controversial views. Anti-war, anti-capitalism, anti-bigotry, he shot it straight from his left-wing hip.

However, thanks to incredibly bad timing, this album never got either the respect or the airplay that it should have done – Mandela had been released in mid-February, just a few days before the Sandinista leader General Ortega had been defeated in Nicaraguan elections, rendering the explosive fire of the lyrics in Third World Warrior, released in March of the same year, much more of a damp squib as there was nothing much to protest any more.

It also pretty much threw cold water on what was left of Kristofferson’s solo music career in the USA for the rest of the decade, with only one new studio album and a couple of live compilations to come in the 1990s, none of which reached the heady heights of his previous success. It’s just as well he’s had an enormously successful film career in the meantime.