Turn That Noise Down - Gary Moore 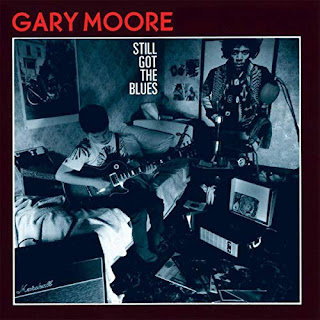 So many well-known albums turn 30 this year and Steve Taylor-Bryant and Susan Omand travel back to 1990 to revisit some of the sounds of their youth that made parents shout "Turn that noise down!" This week, Susan has Still Got the Blues...

“Who’s the guy with the red guitar?”

This was my mother in the background as I watched Top of the Pops in 1990 and the single Still Got the Blues (For You) came on with a "live*" studio performance. So I explained. He’s Gary Moore. Who? Ex of Thin Lizzy. Ah. You know, the guy that did “that” guitar solo in Parisienne Walkways? Oh yeah. That’s him. Nice guitar.

Thankfully, after that, she shut up and we both sat enjoying the song (we weirdly had similar music tastes at the time and I don’t know if that said more about her or me).

Thirty years on and Still Got the Blues is still an excellent album. The songs, being properly bluesy, are timeless. Even though many of them were new for the album, written by Moore himself, they blend seamlessly with the 1950s and 60s covers on the album like Jimmy Rogers’ Walking By Myself and A C Williams’ Oh Pretty Woman (no, not the Roy Orbison song, although it would have been something to hear Gary Moore do a version of that!)

Each track on the album sets toes tapping and head nodding as Moore’s gravelly Irish tones sound melancholy lyrics over the classic 12 bar strict tempo, three chord, blues and that red guitar sings and soars effortlessly over the whole in a way that only Gary Moore could do. Stand out tracks include his version of As the Years Go Passing By, which has a surprising but beautiful piano section, and the wonderful Texas Strut which has a real country sound to the intro before the tempo kicks up and it’s good old fashioned rock and roll.

But it’s the title track that will always be my favourite from this album because it breaks my heart every single time I listen to it. The guy with the red guitar, who died nine years ago last month, was a unique talent lost far too soon and, yeah Mr Gary Moore, I’ve still got the blues over you.