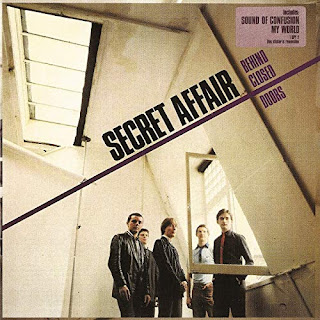 Inspired by our series of articles looking back at music released 30 years ago, Jimmy Hunter takes a step further back in time to give us a Song of the Day 1980. This week, he has a date with a Secret Affair...

Now, you may remember that in September of 1979, a band appeared with a rather jolly ditty – a band that was part of the mod/new wave movement and I suppose today’s version of the song would be aiming for anthemic but in reality, achieving forgettable. It was called Time for Action.

The follow up single was even more catchy and sang us into spring of 1980. Blink and you’d miss them, this week we’re listening to My World by Secret Affair. A couple of fairly talented songwriters discovered they were reasonably talented and spent several months penning songs and then got a band and studio time.

Unusually for this genre and type of band, there’s a rather grandiose [What??? – Ed] introduction consisting of strings. The strings form a rather jumpy bassline that reminds me of the bassline on ELO’s Livin’ Thing. That’s by no means a demeaning remark as I think it works well, gives the sound substance and adds to the rhythm.

The way the vocal is constructed and arranged really reminds of something I can’t quite reach. There are a couple of twists and turns in the verses which keep it interesting and the melody never gets repetitive or boring. The musical arrangement is such that there’s always “backing noise”, if you catch my drift.

It’s a cracking single and it didn’t actually do so very badly, commercially, and it’s one of those where, when you’re watching TOTP2 you burst out with “oh I remember that!”. Well, welcome to, er, My World … see what I did there ..??? [No? What did you do? – Ed].