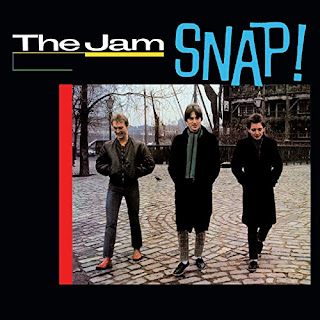 Inspired by our series of articles looking back at music released 30 years ago, Jimmy Hunter takes a step further back in time to give us a Song of the Day 1980. This week, he's Going Underground...

This week’s choice may come as a surprise to some people but hopefully fewer than before I started writing these reviews. Whilst I may have definite genres of which I’m a big fan, my tastes are eclectic. You therefore may or may not be interested in the fact that during this time in 1980, my mates and me were listening to this track, recorded from the Sunday charts show, at a caravan park in Perthshire.

My choice this week is Going Underground by The Jam. Not the intended single but, due to a labelling error at the factory, this b-side became an unexpected a-side and an unexpected hit. Cleverly released by the record label the day after the charts were compiled, it had a full week of sales before the next week’s chart and it made its chart debut at nr. 1.

Possibly more “radio 1 friendly” than its eventually labelled flip double-A side counterpart, Going Underground still packs a well aimed punch at the establishment. Bearing in mind Thatcher had come to power a mere 10 months prior to this release, Weller’s lyrics had already claimed some establishment victims (Eton Rifles) and with some very catchy melodies.

Starting as a pre punk prog rock-ish schoolboy outfit in the early ‘70s the group had established a solid fanbase by the time record deals came along, mostly due to their touring and appearances in pubs and punk venues in and around London. Dressed in mod suits their look and sound was quite unique. Paul Weller, lead singer and main songwriter had many influences and I regard him as one of the best song writers this country has produced.

This record rejects Thatcher’s theme of “do better for yourself” by saying no, I’m just fine as I am. I always feel there’s the spectre of right wing populism being fought here, something unsaid yet a defiant lyric right from the very start:

An echo from history that still has much relevance today …