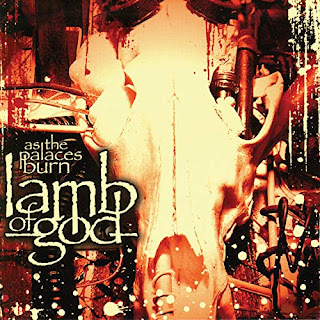 David Ames shares some of the songs that have played an important part in his own personal soundtrack. Today he goes to Ruin...

Is there anything better than music that makes you want to punch with wild abandon everything and everyone in the world? For me, Lamb of God has that effect. The five-piece have been delivering consistently great metal for the past 19 years and their live shows are unmatched in metal performance and aggression. They seem to have picked up where Pantera left off, releasing a series of albums full of passion, fire, anger, political awareness, and of course…incredible drumming and guitar/bass work. Simply put; the boys know what they are doing and they do it well.

My first introduction to this song was also my first introduction to the band. I was at Ozzfest in 2004 and a band I had never heard of took the stage with a massive colorful banner, streaked with black and red. To this point, I had never really been a fan of super heavy music. The heaviest I had really liked prior to this concert were nu-metal bands like Korn and Slipknot. Lamb of God took the stage, dressed simply in shorts and t-shirts and kicked immediately into “Ruin” which begins with fast-paced guitar and drums and a driving rhythm that never really slows until the incredible outro. As soon as Randy Blythe let out that first epic scream, and then held it for what seemed like forever, my eyes were opened and I was a fan.

Lamb of God really opened my eyes to the potential of heavy music and this song was a huge part of that process. The lyrics are also great, talking about how giving up yourself to someone else wants you will eventually result in the death of what makes you an individual: “The knowledge that seeking the favor of another is the murder of self.” Whether the lyrics are dealing with politics or religion or love, they resonate on each level and the music delivers in every facet.

Quick side note, the drum roll at 2:39 is incredible and leads immediately into a heavy bridge which concludes with a slow, sludgy outro which to this still makes me want to punch everyone in the best possible way. If you are at all a fan of heavy music, this is a song you NEED to hear.