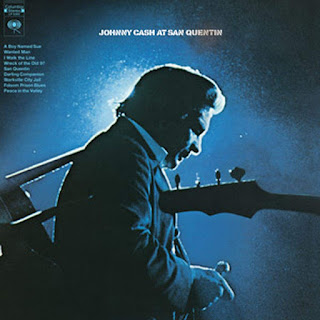 David Ames shares some of the songs that have played an important part in his own personal soundtrack. Today he's a Boy Named Sue...

This is one of those songs with such an insane amount of nostalgia that the sheer mention of the title makes me smile from ear to ear. I know that this isn’t one of Cash’s most celebrated or, honestly, even one of his best songs, but it is special to me for many reasons: One is that it created a love for actual country music in me, which was pretty rough considering the dreck that is out there in the modern county scene. Another reason I love this song is that it takes me back to those four years of high school and my first job at the local ice cream stand where we would sing this entire album from start to finish but focus mainly on “A Boy Named Sue”.

The song was written by childhood favorite Shel Silverstein (of Where the Sidewalk Ends and The Giving Tree, among many other works) and chronicles the life a boy whose father abandoned him and left nothing but a guitar, a bottle of booze, and his name: Sue. The song talks about how he had to get hard-nosed and smart to survive in the world because of his name, and how, eventually, he made it his life mission to track down his father and kill the old man for naming him Sue. The song is simple but fun and, in the way only real country can, tells a story in an interesting way. The song begs to be belted out together with Cash and any other friends who may be in the area at the time.