Review - War of the Mind 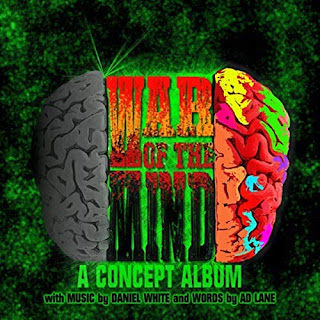 Steve Taylor-Bryant heads for the front lines and listens to War of the Mind, the new concept album by Daniel White, featuring A D Lane...

I’ll be honest from the outset and tell you that Daniel White, whose brainchild this album is, is someone I consider a friend, and often a contributor to our sites. As with anybody though, that doesn’t guarantee any favours from me, no sir, if anything it makes me often go the other way and perhaps judge too harshly. This is an incredible personal journey for Daniel, and his cohort AD Lane, a filmmaker I admire as both an artist and a human being, and as such I felt a little trepidation when Daniel asked for thoughts.

It feels like I’m trespassing inside a friend's soul and, for the first twenty minutes, I was extremely uncomfortable, so had to switch off the album and come back to it later. Once I’d got over my silly little foibles and could listen with an open mind though, what I got was something quite spectacular that felt like moments throughout my film and television history mixed with the idea of "what if War of the Worlds was a mental health concept". It was actually quite stunning and you probably need this explained to you.

The album itself is constructed in a similar way to Jeff Wayne’s War of the Worlds epic from back in 1978, an album constantly played throughout my childhood. There’s a story, a narrative and a guide in AD Lane and track after track of music setting the tone of the story as you travel through. Except you aren’t travelling through a tale of aliens appearing from Mars to invade our planet, you’re travelling through the everyday anxieties and emotions of a mental health sufferer as they come to terms with what’s happening to them and, as an idea and as way to open yourself up to the public, that is incredibly brave and I applaud both gentlemen for carrying it off so well.

It’s the percussion throughout and the early brass and strings that throw up the television and film memories though. It’s when you see Heath Ledger’s Joker in The Dark Knight mixed with The Master in The Sound of Drums episode of Doctor Who meeting Nine Inch Nails and the memories I get, mixed with the anxiousness the music gives me, is masterful.

Daniel is a musically educated man, this I know of him, and so it’s no surprise that memories tied to scores by Hans Zimmer and Murray Gold are so prevalent but I’d like to take a moment to state that in no way do I think this is Daniel’s tribute to his idols; no, it’s much deeper than that and, because the journey you’re on is such a personal one, I expect the memories and emotions another listener will experience will differ to those I had. That’s pretty clever music making if you ask me.

Overall I consider War of the Mind a masterpiece, a melting of styles all new yet familiar complementing a personal story that can get quite dark and cut close to bone if you’re a sufferer yourself. One man's masterpiece is another mans junk though and I think the album, its concept, the emotive style in the production, may not be for everyone. I think Daniel knows that may be the case and I hope he doesn’t get too down if it’s not as warmly received by all as it was by me. It’s well worth trying though and seeing what you think.

Enjoy your journey, enjoy your war.