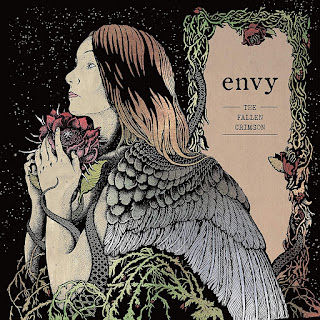 Will Ruairi B be green with envy or left seeing red as he listens to Envy's latest album, The Fallen Crimson...

For me, Japan’s veterans of post-hardcore/screamo Envy have not only been a consistent and supremely powerful music act, but also one of unappreciated importance. Having been active for almost thirty years, their influence (especially in regards to their early works, notably All The Footprints You’ve Ever Left… and A Dead Sinking Story) can be heard in the most acclaimed posthardcore/screamo acts of the twentieth century, such as Touché Amore, Pianos Become The Teeth and even La Dispute. Meaning no discredit to the aforementioned bands (La Dispute being one of my all-time favourites), but Envy appears to be left in the dark, not even close to being a household name (or at least not as appreciated as they should be), usually only having supporting-slots in live shows outside of East Asia. I would also argue that Envy were a major player in influencing the ever-growing post-black metal genre, with music acts like Alcest taking many hints in their compositions and contrast-of-sound from Envy’s material. Don’t believe me? Just listen to cuts like Go Mad and Mark and A Cage It Falls Into.

Despite general preference to Envy’s early material for the unsung influence it had on its respected genre as a whole, I don’t believe they’ll ever top Insomniac Doze; a slower, more mature journey into the bittersweet, filled to the brim with enormous emotion in both its quietest and loudest moments, composed in such a way to break the listener down and build them up again, most of the time within the span of each individual song (I mean this in the best way possible). It was also concrete proof that Envy really know how to write long compositions, proven further by their equally exceptional EP Abyssal, which was released the year after, and I’ll fight tooth and nail in saying A Road of Winds The Water Builds might well be the best screamo song ever composed. It’s also worth mentioning it’s remarkable how Envy can communicate with and move the listener despite the clear language-difference, that being a testament to their talent in composition alone. 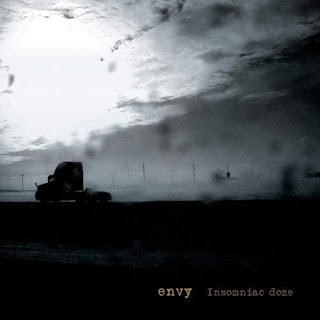 However, Envy experienced a slight decline after Insomniac Doze. Their subsequent release Recitation attempted to perfect the previous sound explored on Insomniac Doze and Abyssal, and resulted in a record which was still definitely “Envy”, and maintained their emotional weight (along with a slightly “cinematic” flair), but for those of us who already believed Insomniac Doze was a near-perfect release, it simply felt like a sequel rather than its own personality. The more high-energy tracks seemed to explore rock-oriented riffs rather than the dissonance of their earlier releases. Their next effort Atheist’s Cornea was, instead, a retreading of their aforementioned early material, and it’s certainly a welcome addition from fans but suffered from the same “sequel” feeling as Recitation, albeit for a different chapter in Envy’s discography, while being (in my opinion) a superior release compared to the previous. It was still a cut above the rest, and proof that Envy maintained their talent in what they do, and left me with great anticipation for their next release.

After a bump in the road after the supposed departure of vocalist/sequencer and founding member Tetsuya Fukagawa in 2016 (which was soon a defunct issue with the release of the Alnair in August single in 2018, which had Fukagawa back in full swing, with both tracks from it making an appearance on this album) this brings us on to The Fallen Crimson, the new full-length from Envy after a long five-year gap between albums. So, knowing what we now know, how does it fare compared to the last two releases and, more importantly, does it stand as a competent addition to their already remarkable discography?

The opener, Statement of Freedom, displays Envy’s melodic, thrashy, post-hardcore roots with heavy riffing, varied drum patterns and Fukagawa’s trademark raw screams, complete with the bittersweet, escalating guitar passages that have always been one of the band’s greatest strengths. Swaying Leaves and Scattering Breaths showcases Envy at their prettiest; largely instrumental with a focus on post-rock, with the vocals going from their familiar Japanese spoken-word into a genuinely gorgeous, layered vocal harmony between Fukagawa and the clean female singing (last heard on Recitation) that crops up frequently throughout the record.

A Faint New World is one of the moodier cuts, beginning with a more ominous post-rock passage before progressing into blistering post-hardcore in the latter half while Fukagawa’s anguished vocals soar above. Rhythm sees envy at their most beautiful and uplifting, featuring female-sung lullaby vocals as the centrepiece. This plays clear tribute to the opening and closing cuts of Recitation, and draws comparisons to the latter material of a band like Rolo Tomassi, fans of which will derive much enjoyment from this track. Marginalized Thread is another fast but uplifting post-hardcore piece from the Alnair in August single, and fits like a glove into the general sound of the record, featuring more clean-sung chorus lines amidst the screams and twangy guitar leads. HIKARIA is a nostalgic nod to the slower, post-rock passages and rhythms of Insomniac Doze condensed into a mere five and a half minutes, a feat that I would argue can only be accomplished so effectively by the creator themselves.

Eternal Memories and Reincarnation serves as something of a spoken-word interlude, with ambient influences taking point with keyboard lines that sound almost aquatic in atmosphere, quickly transitioning into one of the most intense cuts off the album, Fingerprint Mark. Here we see Envy attempt to pack almost all of their best elements into a mere three minutes, with the most complex drum patterns on the album, guitar melodies reminiscent of the Abyssal EP, and vocals rotating between anxious spoken passages and panicked, cathartic shouts.

Dawn and Gaze is up next, the other track featured on the Alnair in August single. Like Marginalized Thread, the song doesn’t only fit within the context of the record without issue, but stands out as one of the more unique and powerful tracks, layering the harsh vocals with a more distorted take on the choir vocals, varying between sounding almost computer-like, to as if they’re being heard from underwater. It’s to the band’s credit that their cleaner vocals have been experimented with constantly throughout the record, and acts as one of the best features amid the tight performances.

Memories and The Limit serves as an escalating post-rock piece, building from a quiet, twinkling guitar melody into a bombastic and dramatic finish, sprinkled with Fukagawa’s vocals amidst both the quiet and loud sequences. I would say this track features some of my favourite riffing on the record, with the final stage of the song featuring the same beautiful major leads from the start, albeit louder and varying in key. Simply put, for someone who loves Envy’s quiet passages amid their loud ones, it’s great songwriting.

The album’s closer, A Step In The Morning Glow, evokes memories from the Abyssal EP again, building atmosphere through ambience, then bursting into flourishes of dramatic rock instrumentation, continuing to use the tweaked choir vocals from the previous two tracks to accompany Fukagawa. The track serves as a home for some of the most soaring guitar melodies we’ve heard yet, ending the album with an anxious spoken-word passage to accompany the growing melodies. The track then ends abruptly, bringing us right back to the opening riff of the record.

From the information above, it’s clear you could break open The Fallen Crimson and see all the different stages of Envy’s music contained within each song. Due to the fact the record welcomes in numerous sounds Envy have experimented with in the past, it suffers less from the “sequel” problem of sticking to only one chapter of their discography (like the past two releases), and stands on its own two feet while staying hard-in-hand with the sounds that made Envy great. It’s also a great place to start for new listeners, meaning that it’s hard for me not to recommend it to anyone in that demographic.

But my love for the band’s overall sound doesn’t mean this release isn’t without its flaws. If you were never a fan of Envy’s music, be it their vocals, language-difference, compositions or post-rock passages, this release isn’t going to change anything for you; they’ve very much stuck to their guns. Furthermore, I was disappointed that Envy didn’t attempt any ten or fifteen-minute tracks reminiscent of Insomniac Doze. They’ve proven that they know how to write lengthier tracks (some of them being their best ever), so it’s a shame they decided against including any in this release. In addition, my previous statement about Envy exploring their previous sounds throughout the record almost feels like a “tribute” mentality, leading me to believe that this may well be Envy’s last release, considering it’s been almost thirty years. This is, of course, an assumption, but if this is the case we may well never see Envy attempt any more of the lengthier, more epic tracks that make up my personal favourite cuts from them. It’s also worth noting that A Step In The Morning Glow, while being just as dramatic as the other tracks, is still an abrupt finisher. It’s arguable that Envy have backed themselves in a corner with the bombastic, uplifting nature of almost every track, as it’s hard for there to actually be an effective ending track when almost everything is of that nature, but it would’ve blown me away if Envy managed to pull it off like they did with the closer of All The Footprints You’ve Ever Left…. Unfortunately, this isn’t the case.

A major criticism to throw around is that this record doesn’t re-invent Envy’s material. But the question I want to ask is, do they need to? Envy seem to have an inexhaustible supply of emotion, and they haven’t lost it. The Fallen Crimson stands out as the best of Envy’s releases post-Insomniac Doze, and I find myself lost within their soundscapes just as I was the first time I heard them years ago, and floored by their mastery of the bittersweet. Rather than pay tribute to a specific sound Envy have done, The Fallen Crimson compiles almost everything into a record without making it seem disjointed or “box-ticking”, amidst a few new tricks. It shows maturity from a band who know what they’re doing, despite the numerous stages of their sound. It might not top their earlier works, but it does top the last two albums, and is an exceptional and time-worthy album for dedicated fans and new listeners alike. Envy haven’t compromised their sound one bit, displaying that they’re still one of the top bands for the genre. Highly recommended.

Best Tracks: A Faint New World, Rhythm, Fingerprint Mark, Dawn and Gaze, Memories and The Limit, A Step in The Morning Glow.


Review Copyright Ruairi B – ©Ruairi B 2020 All rights reserved.