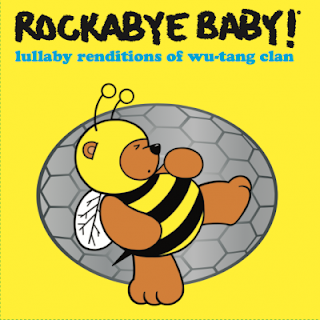 Attention, parents and babies (and everyone else that loves lullabies), this April, Rockabye Baby will celebrate its 100th release with Lullaby Renditions of Wu-Tang Clan. Wait... what?...

In 2006, series co-creator Lisa Roth couldn’t find a gift that was fun and parent-friendly enough for a friend’s baby shower, so she suggested to David Haerle, president of her Los Angeles based employer CMH Label Group, that they do something in the baby business. Development ensued with series co-creator, Valerie Aiello, and a small team. On August 29th of that year, CMH put out the first three Rockabye Baby albums, Coldplay, Metallica and Radiohead. The New York Times profiled the series and literally broke the internet; or at least, the Rockabye Baby website due to all the incoming traffic.

Since then, Rockabye Baby has gained more than 800 million streams and sold nearly two million physical CDs (in the 21st century, mind you!). With this, they have charted on the Billboard Kids Chart (top 10), Billboard Indie Chart (top 20), and Billboard Top 200 Albums Chart with nothing but lullabies. Most importantly, however, the company has brought music from the likes of Nirvana, Led Zeppelin, Snoop Dogg, Bjork, KISS, Kanye, Taylor Swift, Rihanna, Beyoncé and more, from the club to the nursery.

Vocal fans of the series include Kate Hudson, Chelsea Clinton, Chrissy Teigen, Victoria Beckham and Elton John. Its smooth sounds have been featured on Ellen, Jimmy Kimmel, a Super Bowl commercial and more. It’s potentially the first-ever music series to get equal love from Pitchfork and Parents Magazine, Romperand Rolling Stone, but the greatest accolade bestowed on Rockabye Baby thus far might just be: Zzzz’s, from happy parents and babies alike, release after release.

To mark its 100th release, Rockabye Baby decided to (slightly) soften up the hardcore hip hop of Wu-Tang Clan.

Ed's Note - We don't have a Wu-Tang lullaby to share with you yet, but we're sure Snoop Dogg's Gin and Juice will give you a flavour of things to come... (that car!)

You too can lose yourself down the Rockabye rabbit-hole on Youtube here. We spent ages listening to AC/DC, White Stripes, Metallica, Nirvana, The Clash, Nine Inch Nails...