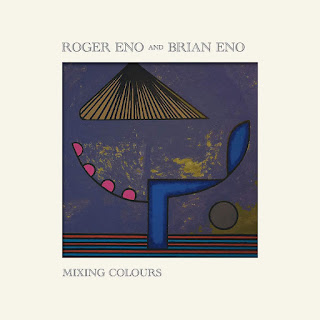 Roger and Brian Eno finally joined forces to make their first ever duo album. Listen to Celeste from Mixing Colours...

Released yesterday in digital, vinyl and digipack formats via Deutsche Grammophon/Universal Music Canada, Mixing Colours explores the nature of sound, its colours and textures, and the subtle variety of moods they inspire.

Roger and Brian’s Deutsche Grammophon debut recording represents a major landmark in a collaboration that began in the early 80’s and draws on their broad and deep individual experience as composers, performers and producers. Mixing Colours evolved from individual pieces that Roger began recording in late 2005. He began sending these to Brian as MIDI files, like aural snapshots of his work at the time. His older brother responded by manipulating their contents and matching mood to particular sounds. The exchange of ideas gradually gathered momentum until it developed into a full body of work.

“We weren’t directing this towards an end result – it was like a back-and-forth conversation we were having over a 15-year period,” recalls Roger. “The idea for a full album emerged as the number of pieces continued to increase. It’s something that neither of us could have arrived at alone.”

The titles of all but one of the finished project’s eighteen tracks are associated with colours, from “Celeste” to “Desert Sand”, “Obsidian” to “Cerulean Blue”, individually simple yet collectively evocative of complex emotions and feelings. The album’s haunting sonic landscape is complemented by it’s artwork, images chosen from the abstract paintings of Dom Theobald. The music is augmented by an accompanying series of short films made by Brian Eno in partnership with long time collaborator, Peter Chilvers.

The first Mixing Colours video which was made for “Celeste” (watch that below) was released on 7 February, with further films for “Blonde” and “Slow Movement: Sand” appearing on 14 February and 13 March respectively. And you can listen to the whole album here for a limited time.


Mixing Colours is a fine example of the power of creative collaboration. Roger and Brian Eno first worked together in company with producer, musician and songwriter Daniel Lanois on the soundtrack to Al Reinert’s documentary feature about NASA’s Apollo programme, For All Mankind (1983). The brothers have since worked in tandem on soundtracks to everything from David Lynch’s Dune (1984), Dario Argento’s Opera (1987) to Danny Boyle’s Mr Wroe’s Virgins (1993) which was nominated for that year’s BAFTAs.