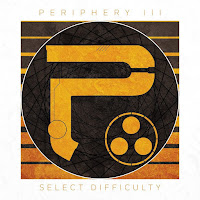 In an effort to further her musical education, Susan Omand has been set "homework" of listening to albums released after the 1980s that she has missed out on. This week she will Select Difficulty...

“Yay, Periphery!” I thought when I first saw the list of albums to listen to for this year’s Educating Omand.

OK, not quite meh. The album opens with The Price is Wrong, the kind of “noise” (sorry, David) that I have come to expect from the more Thunka Raaar albums that I have been subjected to in previous years of Educating Omand. There’s very little to commend it I’m afraid, until the final minute of the track which is at least interesting with a decent diabolic feel.

Motormouth is next and, kind of, more of the same with the vocals. The saving grace for this one is a fascinating atonality making use of diatonic and chromatic arpeggios, with more than a full interval’s jump in some cases.

And then we get to Marigold; by FAR the best track on the album for me! From the properly orchestral sounding start of synthed strings, whose theme is carried throughout the song by different, heavier, instruments through the sing-along anthemic choruses to the brilliant Blade-runner-esque dystopian train noises at the end of the track, it is musically diverse and engaging, rhythmically interesting and vocally actually quite melodic. Love it.

From there though… um. There are tiny sparks of highlights, like the introduction to The Way The News Goes, only to be followed by a fairly bland pop-rock track although it does have an interesting piano section at the end. Or, aptly named for these days, Remain Indoors which, again, doesn’t really tick many boxes for me apart from having an attractive bassline. Also the frenetic percussion on Habitual Line-Stepper. Flatline didn’t set the heart racing but Absolomb started strongly with a fascinating atonality and bookended the track with Bond-like orchestration, making it a close run second favourite. Catch Fire failed to spark for me though, Prayer Position was just “generic noise” (sorry again, David) and Lune was ok, if a bit ballady at the start, although it did make me think of Duran Duran’s Save a Prayer which is always a good thing.

So there are definitely good bits in among the growly mehs but not nearly enough to push this into my top five this year… unless of course the rest of the year’s offerings are REALLY dire! And I think that’s the main problem I have with it. No, not that the rest of the list is going to be dire, well, hopefully not. But that I enjoyed last year’s “first contact” with the band’s work so much that I had really lofty expectations of new innovation and high creativity for this one that just didn’t quite pay off in the same spectacular way - there was some creativity, which made it feel like more of the same in some cases, but it was also just more of the same, if you get my meaning.  Been there, done that, didn't buy the T-shirt the first time either. It was different in exactly the same way as the previous album, so meh. Am I educated this time? Yes, but only in the sense that I’ll stick with what I know of Periphery already and won’t bother digging any further.