Turn That Noise Down - The Highwaymen 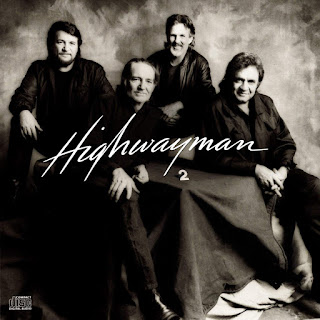 So many well-known albums turn 30 this year and Steve Taylor-Bryant and Susan Omand travel back to 1990 to revisit some of the sounds of their youth that made parents shout "Turn that noise down!" This week, Susan gets held up by The Highwaymen...

If you were asked to name some of country music’s greatest ever stars, I’m pretty sure at least one of the names Johnny Cash, Willie Nelson, Waylon Jennings and Kris Kristofferson would be on your list, right? Now, imagine a supergroup that had them all in the one lineup… welcome to The Highwaymen.


I grew up listening to a lot of country music thanks to my mother’s eclectic music tastes. I could sing all the words to Glenn Campbell’s Rhinestone Cowboy before I was school-age and could execute a mean quickstep to Charlie Pride’s Crystal Chandeliers every time it came on the radio; which it did, regularly, thanks to the Noel Cannon show on Radio Scotland on Tuesday evenings. So, Messrs Cash, Nelson, Jennings and Kristofferson were all very well known and well loved names individually in our house. Then in 1985, they did the near-impossible and put out an album TOGETHER. And I don’t mean a compilation album of their individual hits. No, these country music mega-stars got into the same room together and recorded new music… together!

I didn’t care that it was incredibly uncool to like country music back then (I was mid-teens at the time) The Highwayman was an album that I had to have, it did become a hit with a couple of Top 20 (country chart) songs, and I listened to it regularly and loved it. Then…. everything went quiet for quite a long time. It was obviously a one-off gimmicky thing wasn’t it? But no. In 1990 the creatively named Highwayman 2 hit the shelves so, of course, I bought that too. Sadly, because of a shift in focus towards the bright young things in country music like Dwight Yoakam and Randy Travis, this album didn’t do quite so well in the music charts, nor with the critics, and there are no really famous songs on it that you would know.

However, I still really like Highwayman 2 as an album, purely because I love how their incredibly distinctive voices, and writing this time as six of the 10 songs were written or co-written by the band, also work together so well. The song American Remains is highly political and reminiscent of the protest songs of the sixties and seventies while All In Your Corner is properly an “end of the night” pub singalong, with Trigger, Willie Nelson’s famous guitar making a notable appearance on Texas.

But my favourite song on the album has to be Living Legend, a Kristofferson track made all the more poignant when you realise that only two of the four Highwaymen are still actually living living legends.