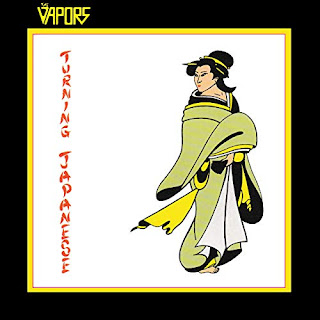 Inspired by our series of articles looking back at music released 30 years ago, Jimmy Hunter takes a step further back in time to give us a Song of the Day 1980. This week, he's Turning Japanese [I really think so - Ed]...

This week’s choice, dear reader, is a simple one, yet one I remember clearly. It’s catchy, some might say annoying (though I wouldn’t say that [Er, who are you kidding??!! – Ed]) and it has two main hooks. The 5-4 (ish) syllable verses then the repetitiveness of the chorus provide the record with enough reasons for it to have been a hit in several countries. Then, well, nothing and the band split two years after their first appearance on Top of the Pops.

I’m talking about The Vapors with Turning Japanese and I like it. It was one of the many records I taped on the chart show on a Sunday evening. It is catchy … quite jerky, not punk but kind of new wave. The band was discovered, produced, managed etc by various members of The Jam, including Paul Weller’s father. This, though, didn’t bring much commercial success after this single’s initial interest.

Those of you who get far enough through my meanderings will realise that I do like a good bassline and this record has it aplenty. The lead/rhythm guitar works in perfect harmony with the bassline and the volume/production ramps up during the chorus quite nicely.

As I recall, it was a bit of a novelty single but it had credibility because it was so well constructed and clearly well produced. In fact, it has a remarkably mature sound for a band discovered only two years previous to this and with not much (recording/studio) experience. I say novelty because is a couple of places there’s the stereotypical sound of a Japanese medley. I’ve dwelt on this in the past and whilst this little Japanese sounding oddity irks me, I don’t think the record would be the same without it. No, I know, don’t @ me!!

So hear is the group’s first appearance on TOTP with Kid Jensen applying the kiss of death by saying he reckoned they’d go on to do great things!