SotD80 - Martha and the Muffins 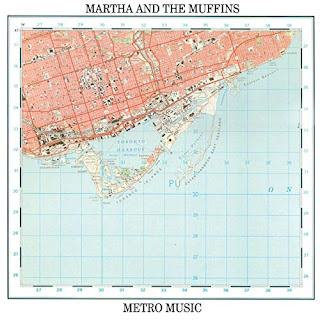 Inspired by our series of articles looking back at music released 30 years ago, Jimmy Hunter takes a step further back in time to give us a Song of the Day 1980. This week, he heads faraway in time...

There were two Marthas, but the one who sings lead on this record (Johnson) is the original and one of the founding members. The other Martha (Ladly), incidentally, went on to work in both backing vocals and design for such cultural heavyweights as OMD and The Associates.

However, back to the other Martha, the original Martha. Written by Mark Gane, the band’s co-founder and Martha J’s boyfriend, it went on to achieve much success in its native Canada, as did the band. Memorably it starts with a fade-in synth followed by a fab guitar riff.

Now it’s touted as new wave but I disagree [Oh, I’m shocked... – Ed] because it’s more typical of Canadian rock at the time – not metal, pop/rock. But not what I would call new wave. That said, the guitar work is superb and the twanging strings keep this record moving at a pace and Martha’s superb vocals provide the hook in the chorus:

From nine till five I have to spend my time at work
The job is very boring, I'm an office clerk
The only thing that helps pass the time away
Is knowing I'll be back at Echo Beach some day

In 2010 they released a 30th anniversary version of the record and it’s superb – a very different entity and an acoustic one. I was pessimistic at the thought but I loved it initially and it’s grown on me since. It’s somehow the perfect middle-aged version of what I imagine the record grew into, if that makes sense.

1980 saw me going abroad for the second time in my short life – to Canada and on an aeroplane too, another first. All of my thoughts were about that holiday and what adventures it held and this single simply intensified those feelings. I still love the record and I remember what those feelings were like.

So, dear reader, a treat. Risking the sneering tutting from our dear editor [AS IF! - Ed], here are both version of the single:

The original: with Marthas Ladly on keyboards and Johnson on lead vocals.

And the 30th anniversary version

Please, PLEASE, whatever you do, do not search for Toyah’s abysmal cover!!