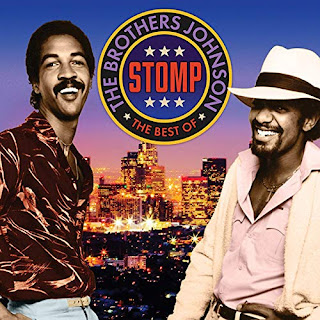 Inspired by our series of articles looking back at music released 30 years ago, Jimmy Hunter takes a step further back in time to give us a Song of the Day 1980. This week, he goes Stomp!...

Ah, the sound that serenaded the start of spring 1980. Well, one of them at least but this I remember clearly.

On the A&M label dear reader, this week’s choice is Stomp! by The Brothers Johnson. The exclamation mark is on purpose so no need for grammar fusspots to @ me. There may have been a couple of surprises with this record – the first being that it was (such) a hit and the second, that it was a bigger hit in the UK than the US.

I decided to amuse myself by finding out if this record had a Wikipedia page an indeed it does (please, I urge you, don’t bother yourself [it's here, I bothered for you - Ed]). I noted with spitting distaste that under “genre” its listed as “post disco”. Pah! That’s not even a genre. And this is clearly disco/R&B so what do they know anyway.

If the record sounds familiar then that’s because there are two very famous hands behind the writing and producing: Rod Temperton and Quincy Jones. A magical combination I’m sure you will agree. The sound is clear: the Jones production values are all there with the jumping bassline and the instrumentals, the melody coming in from the very first bar.

For me, perhaps oddly, with this particular record the lyrics are neither here nor there. And by that I mean that I’m not really listening to them, if that makes sense. Oh I can hear them and understand most of them but in my mind they are (simply) part of the orchestration. Part of the music itself, an essential part of the melody

The brothers had some success and were part of a much bigger group of musicians and artists at the time, mid – late ‘70s who sessioned on each other’s records, provided backing vocals, shared studios etc. However as a band they split a couple of years after this and this was definitely their commercial highlight. They pursued different and very successful solo projects but much of their material was ruined in the huge fire at Universal in 2008 – many artists and musicians suffered this sad fate with a reported 500,000 master copies being destroyed.

But let’s pay no never-mind to that and let’s just tap [or STOMP! - Ed] our feet or jiggle our hips to what is really a very good dance track. Here, for your enjoyment, is the official video that accompanied the record: