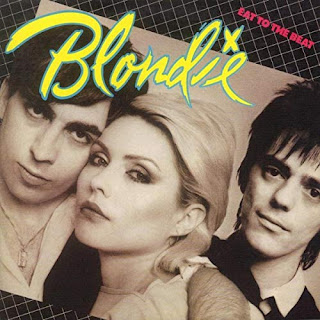 Inspired by our series of articles looking back at music released 30 years ago, Jimmy Hunter takes a step further back in time to give us a Song of the Day 1980. This week, he goes a bomb for Atomic...

When I first heard this record I loved it. When I first saw the official video, I loved it even more. When I bought the 12” single, I was livid – it was just the same as the 7” and not the same mix used in the video. Miffed. Why would Chrysalis do this? Miserable money grabbing peasants.

However. I’m calm enough now to talk about this week’s choice – Atomic by the blonde bombshell herself, Blondie. [You mean Deborah Harry?? – Ed] The 2nd single from the album Eat to the Beat, a commercial success was almost guaranteed – almost. Would it have been as successful without the almost iconic video and accompanying remixed single? Probably.

Atomic, however is a great track – whichever version you’re listening to. Back to electronic disco with a pumping BPM, this was another assured dancefloor hit – a hit it was but eclipsed on the dance floor by Call Me, later in the spring. I really do like this record and it’s not one I listen to regularly – not out of any dislike, it simply doesn’t appear on any playlists. Yet.

The hook is in the lyrics:

This works especially in the repeat-to-fade section at the end but the record is, overall, well put together. Without perhaps, in my eyes, the complexity of Heart of Glass, it’s a good, solid electronic dance record, well constructed and well produced with a slightly different sound.

The rather odd thing is that it wasn’t released simultaneously in the UK and the US. Oh no, over there the more US commercial release was to be Call Me – the theme from the film American Gigolo and it would be an irritating few months before that was to be released here. Will I review it later this year, I wonder? [Moroder again!! – Ed].

So, sit back and enjoy the original, official video for Atomic.