Review - The Making of Harry Potter

With the odd film spoiler, did The Making of Harry Potter studio tour cast a spell over Potterhead Daniel White?...

Read Daniel's articles about the films themselves and about the soundtracks.

This week my youngest son celebrated his 11th birthday and, in addition to receiving his letter from Hogwarts, we were to discover that it is indeed possible to fall even more in love with the Harry Potter films than we were already.

Back in 1997 David Heyman (Heyday Films) received a copy of Harry Potter and The Philosophers Stone. Disliking the book because of its "rubbish title," he relegated it to the low priority shelf in his office. It was only when a production assistant picked it up, read it and came back excitedly telling Heyman how amazing it was did he read it. The rest, as they say, is history and arguably the most successful franchise of films was born. Heyday Films produced all 8 of the Potter films and worked closely with Rowling to faithfully bring her work to the big screen. Warner Brothers London opened the Harry Potter exhibition at the Levesden studio; a place that had become a second home to cast and crew for 10 years. No one can deny that Warner Brothers welcomed the chance to maximise profit from the Potter fandom and yet, when you visit, this is so much more than a huge cash cow. It is, at its gloriously magical heart, a love letter to the fans that made the films the monumental success that that they are. The Making of Harry Potter tour is unlike any other you will have visited before or will afterwards.

Visiting the tour is not cheap but, unlike many other attractions, every moment you spend at the home of Harry Potter is worth the price of admission. This was where the films were made and filmed and the tour comprises of sets and props that were all used in the films. No detail is spared and no corners cut because us Harry Potter fans are obsessive about detail and getting everything right matters. It matters to the staff as well and you are under no illusion that everyone that works there is every bit as much of a Potter fan as the visitors. This isn't just a tour, it is an experience, a loving tribute to a 10 year franchise that has captured the hearts of adult and child alike. As you walk towards the studio building there are Wizard chess pieces outside (as used in the first film) and, from that first tantalising view, the magic just doesn't end. Pre-booking time slots for your visit means that queuing and congestion is minimised and yet there is no feeling of hurry or rush. The Tour suggests that you need to allow at least 3 1/2 hours but for any Potter fan it would be easy to double this and still want to come back for a second visit. Throughout our visit the iconic Harry Potter soundtracks were playing and even the foyer carpet was Potterised (the use of the dramatic Chamber of Secrets dueling floor patterns was inspired.)

I have no wish to spoil anyone's first visit so I won't be giving any details of the tour itself but what is amazing is the sheer scale of the sets. The Ministry of Magic lobby was an astonishing 32 ft high and featured 70 fireplaces for the arriving wizards to enter from. The attention to detail with everything from the boot portkey to the Dursley house really is testament to the commitment and level of skill that the Potter film team gave. Some of the scenes within the Forbidden Forest were hand painted and Buckbeak's feathers were handmade and handstitched into place. What impressed me was the use of highly complex working mechanical effects and huge doors, such as the Gringotts vault door and the entrance to the Chamber of Secrets, are as impressive in reality as they are on screen. The behind the scenes 'green screen' effects were as painstakingly put together as the creature effects and then seamlessly added into the films location shoots. The Harry Potter films are one of the finest examples of how to use green screen technology in a way that doesn't date or look unrealistic in the context of the story.

As a Harry Potter fan I never imagined the excitement that would be caused as a result of walking around Diagon Alley or approaching the severe looking goblin through Gringotts. Such is the magic of Potter that it transports you into a magical world where the impossible suddenly becomes everyday. Sitting on the Hogwarts Express actually at Platform 9 and 3/4 is an experience I will never forget and, for one second, you can believe that you are about to start your journey to Hogwarts. The tour has an amazing interactive digital guide which allows you even greater insight into the making of the films. One of the comments that will live with me was about Dobby, may he rest in peace, the house elf. Fully digitally rendered and yet created in such a way that audiences are left devastated at his sudden death. Dobby's creator commented "you know you have created something amazing when audiences cry at the death of something that was born on a computer screen" It isn't just Dobby either, as Buckbeak and even Aragog have a wonderful realness to them. Every aspect of the Potter films, from concept artwork through the breathtaking models and creature effects are works of art in themselves.

One of the worst things about growing up is that you leave behind that childish wonder that makes Christmas magical. It becomes harder and harder to escape into fantastical and mystical worlds and yet, for the first time in many years, I experienced true Childlike wonder. The Warner Brothers Tour was created to give something back to the fans that love Harry Potter and watching the films from now on will have an even more connected and emotional resonance for me. I didn't want to leave at the end of the day and will return as soon as I can. For one day I was also a wizard and not a muggle! 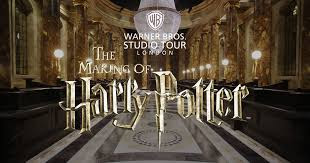 Find out more about The Making of Harry Potter tour and book tickets here.