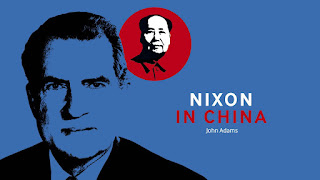 The Scottish Opera premiere of John Adams’ Nixon in China opens tomorrow at the Theatre Royal in Glasgow...

Adams’ work, a collaboration with poet and librettist Alice Goodman and theatre director Peter Sellars, is inspired by Nixon’s much-publicised 1972 visit to China, the first time an American president had journeyed there. Hailed as the pioneer of a new kind of ‘docu-opera’, in his eclectic score Adams’ mixes a huge range of sounds from pre-recorded electronics to live passages echoing Wagner and Johann Strauss, alongside jazz references and big band sounds that evoke the 1930s of Nixon’s youth. Featuring fascinating archive footage from the Richard Nixon Presidential Library and Museum and The Richard Nixon Foundation, the opera, which premiered in 1987, is as much about the private moments as the public during the historic trip.

It explores the experience of the wives as well as the husbands, and memory versus fact.

John Fulljames, Director of Opera at The Royal Danish Theatre, directs an exciting cast including Eric Greene as Richard Nixon, Julia Sporsén (Ariadne auf Naxos 2018) as Pat Nixon, Mark Le Brocq (Anthropocene 2019) as Mao Tse-tung, and Hye-Youn Lee (La bohème 2017) as Madame Mao. The conductor is Joana Carneiro, Principal Conductor of the Orquestra Sinfonica Portuguesa at Teatro Sao Carlos in Lisbon. Designs are by Dick Bird, who last worked with Scottish Opera on The Mikado in 2016.

Director John Fulljames said: ‘Nixon in China is a classic opera; Nixon is a hero of Verdian complexity and Madame Mao’s vocal fireworks ranks alongside those of the Queen of the Night. This is a spell-bending score which established John Adams’ as one of the great twentieth century opera composers and put American opera on a world stage. Although the events of President Richard Nixon’s 1972 visit to Chairman Mao in China have passed into history, this tale of the staging of global politics at the birth of the live media age feels more potent than ever. With a cast led by Eric Greene as President Nixon, and Julia Sporsén as Pat Nixon we have a great team to stage this myth about the ultimate powerlessness of the most powerful people in the world.’

Those who wish to discover more about how the production was created can attend Nixon in China Unwrapped, one-hour tasters delving further into the show, as well as Pre-show Talks. Audience members with a visual impairment can enjoy the full opera experience at audio-described performances, which have a live commentary describing the action on stage without compromising the music.