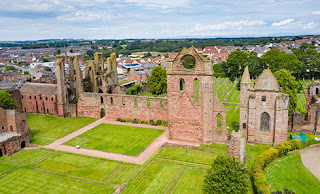 Tickets are now on sale for ‘Of Light Breaking’, the spectacular concert taking place within Arbroath Abbey on April 4th to launch the start of the Arbroath 2020 Festival, commemorating the 700th anniversary of the Declaration of Arbroath...

The world premiere of ‘Of Light Breaking’ will be performed by over 300 singers from choirs across Angus, accompanied by Arbroath Instrumental Band. Described as a musical celebration of the landscape and history of Angus, ‘Of Light Breaking’ was created by Paul Mealor, one of the world’s most performed, recorded and broadcast living composers, and renowned poet and lyricist Grahame Davies.

“We were delighted to be commissioned to create a piece of music to celebrate the 700th anniversary of the Declaration of Arbroath,” said Paul Mealor, who was voted ‘The nation’s favourite composer’ and is professor of Composition at the University Of Aberdeen. “The Declaration of Arbroath is one of Europe’s most important surviving documents. It’s about people having their own voice – so a choral work is a very fitting tribute.”

Paul revealed that, as the singers assemble on stage, Of Light Breaking’ will begin with a chant which could have been sung at sunrise 700 years ago by the monks who lived in Arbroath Abbey. “The medieval sound gradually becomes more modern until it comes to a triumphant end with a crescendo of brass, percussion and voices celebrating the sunset,” continued Paul.

“There’s nothing more powerful than the human voice and, with so many choirs in the Angus area, it makes absolute sense that they’ll come together on April 4 and enable Arbroath to voice its part in history at the start of the town’s momentous 2020 celebrations.”

As well as the very first performance of ‘Of Light Breaking’, the concert on April 4 will also feature other musical pieces, all with the same theme – light.

“This is going to be a wonderful evening of music in a unique venue,” said Harry Simpson, chair of Arbroath 2020, the charity established to commemorate the 700th anniversary of the Declaration of Arbroath: “Arbroath and the surrounding area has long been renowned as a place where music is a traditional, and much loved, part of our culture. It’s wonderful that so many talented local singers and musicians will come together in the highly evocative surroundings of Arbroath Abbey to commemorate an event that happened there exactly 700 years ago.”

Paul Mealor and Grahame Davies visited Arbroath several times while working on ‘Of Light Breaking’. “We spoke to local people, we explored the area and we discovered the history of the town,” said Paul. “During our time in the town, we visited Arbroath Abbey – and we were thrilled when Historic Environment Scotland granted permission for the debut of ‘Of Light Breaking’ to take place within the ruins of the Abbey’s mighty sandstone walls. It’s the perfect venue for this piece of music.

“As well as having splendid acoustics, Arbroath Abbey is steeped in history and memories. When you sing in such a historic, atmospheric place, the sound resonates across the centuries. Of Light Breaking’ is going to be an unforgettable evening celebrating Arbroath’s history, its surroundings and its musical heritage.”