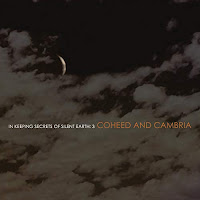 In an effort to further her musical education, Susan Omand has been set "homework" of listening to albums released after the 1980s that she has missed out on. This week sees her not keeping the secret of In Keeping Secrets of Silent Earth 3...

Yes, we’re back among the Coheed for the first album of this year’s Educating Omand! If you’ve been following my progress over the past two years, you’ll know that I’ve come across these guys before [read that review here] and I have become quite a fan of their work so it was fun to look at this one in more detail.

I’ve listened to this album several times now and that phone at the start of the first track makes me jump. Every. Damned. TIME! I don’t know why, I know it’s not my phone, it’s not even my ringtone, but still I physically flinch. Anyhow, that first song, The Ring in Return, on In Keeping Secrets of Silent Earth: 3 sets up the rest of the album by introducing a strong theme that recurs throughout. That’s the thing I like about Coheed & Cambria I think; it’s very prog rock in that it feels like the whole album tells a complete story in an almost operatic way but it also, in a way, feels a lot more up to date than the usual 70s concept albums, mostly because of the instrumentation. It’s a lot heavier sounding with the dated organ/synth element that you’d normally associate with “prog” translated into fantastic guitar work.

The other thing, for me, that lifts Coheed far above the norm is the vocal genius of Claudio Sanchez. If you asked me to describe what he sounded like without you actually listening to an example, I’d say “imagine if early 80’s Feargal Sharkey sang with the phrasing of Fish from Marillion.” Sanchez’s voice has that wonderful throaty edge that Sharkey has, coupled with the breathy lightness of touch of Fish, it’s quite superb.

Is this album as good as the last one I listened to? I don’t think so [shock, horror!- Ed] BUT that’s only because my expectations were raised through the roof having listened to GAIBSIV Vol 1 first. I’m not saying that In Keeping Secrets is a bad album – far from it, this is an album that I often put on while I’m doing other things and it is brilliant, with a lot of fantastic boppy tracks that I find myself nodding along to or even singing along with. It’s just not got that “stop you in your tracks” WOW factor that GAIBSIV had for me.

That said, it’s been so difficult for me to choose a favourite track from the album as everything has much to commend it. However, on reflection, Three Evils (Embodied in Love and Shadow) is probably it because it’s the best example of what the rest of the album has to offer and I absolutely adore the repetition of the lyric “pull the trigger and the nightmare stops” ; such dark imagery given a real buoyancy in a very similar way to the work of REM.

So, has the first assignment of Educating Omand Year Three educated me? No, but only because I am already a huge fan of the band, thanks to my previous “education.” Thank you for that, Mr Ames.