Turn That Noise Down - Fish 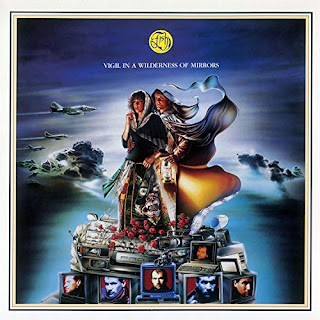 So many well-known albums turn 30 this year and Steve Taylor-Bryant and Susan Omand travel back to 1990 to revisit some of the sounds of their youth that made parents shout "Turn that noise down!" This week, Susan stands Vigil in a Wilderness of Mirrors...


Fish without Marillion is a lot better than Marillion without Fish. In my opinion anyway.

Vigil in the Wilderness of Mirrors was Fish’s solo debut, having parted ways with the band a couple of years earlier, and it still sounds a bit Marillion-y just with more synth in among the proggy guitars. Before I start in on the music though, I must mention the cover art. It’s done by Mark Wilkinson, who had illustrated all the brilliant Marillion albums and singles while Fish was their singer and went on to do almost all of Fish’s solo covers. The painting contains many references to Fish’s lyrics, politics and Scottish cultural interests as well as "hidden" messages for fans of his work. The full painting is very striking and detailed and it really is worth getting the gatefold LP to appreciate it in all its glory.

There’s a strong celtic influence to the title track, including the wonderful Davey Spillane on both pipes and tin whistle, although it’s also painfully late 80’s; the album was actually finished in 1989 but EMI held off release until ’90 so it didn’t clash with the Marillion album Season’s End, the first with new singer Steve Hogarth (and no, I have never forgiven them).

Big Wedge is next and it’s understandable that it was one of the three singles off the album as it has a much more commercial sound than we were used to with Fish; it actually reminds me a lot of Phil Collins post-Genesis and has that same cynical lilt to the lyrics in among the boppy pop.
State of Mind is another single and another political statement, this time reflecting the state of UK politics more than the US capitalism of Big Wedge. Again, there’s not the rock edge of a Marillion track but Fish’s voice sounds a lot more like him as it hits the right register for him.

The Company, which was released as a single in Germany and that’s a shame as it’s probably one of the best tracks on the album for me. Its stripped back, folky sounding, backing is a lot more Marillion, letting Fish’s vocals soar almost a capella throughout with a separate melody burbling underneath and he sounds a lot more within his comfort zone here. It’s also helped along by those doyens of Scottish folk music, Phil Cunningham and Aly Bain providing some of the backing.

A Gentleman’s Excuse Me is the single that I remember getting into the charts and on TotP back in the day and it’s still wonderful, pared down to almost just Fish’s voice with piano and orchestral accompaniment.

A total change of pace for Voyeur and an overload of electronics with heavy synth and pads but if you can fight through that, the lyrics are very intelligent, verses delivered in an almost spoken format and the sampling over the prog keys in the middle eight adds the edge it needs.

Family Business is another where the lyrics are a lot harder than the song suggests, with themes of domestic violence, but we’re on to Bon Jovi-esque hard rock and twiddly guitars with View From the Hill which goes back to a theme of anti-materialism that is threaded throughout the whole album.

The original, un-remastered album closes out with Cliché, a cynical love song in the vein of Gentleman’s Excuse Me, although the backing is a lot more layered and it has a different feel to it without the vocal taking centre stage, instead the focus is a lot more on the guitar solo, which is good, thanks to the work of ex Dire Straits guitarist Hal Lindes.

So, for his solo debut, it was a worthy effort but you could tell that he was trying to be “different” to what had gone before and that isn’t always a good thing.