Turn That Noise Down - Black Crowes 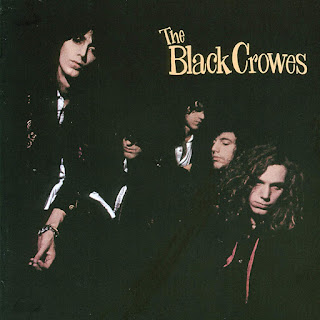 So many well-known albums turn 30 this year and Steve Taylor-Bryant and Susan Omand travel back to 1990 to revisit some of the sounds of their youth that made parents shout "Turn that noise down!" This week, Steve shakes his Money Maker...

Entertainment Weekly’s review of this debut album still sticks in my mind, it was something like “The Black Crowes are to the early Rolling Stones what Christian Slater is to the young Jack Nicholson: a self-conscious imitation, but fine enough in its own right” and to honest that was pretty much the gist of what I was going to write. I love The Black Crowes, they are tight sounding and energetic band who are very easy to listen to but won’t completely blow you away until later in life when they star in Mr. Robot. No, wait! That’s wrong isn’t it? But you get my meaning. They aren’t Aerosmith or The Rolling Stones but they don’t have to be, there’s room enough in the world for bands who are great without ever becoming iconic. Those who think I’m being unfair on The Black Crowes seem to forget that most of the world only remember them for an Otis Redding cover but could name numerous songs from either Aerosmith or Jagger et al. However, that doesn’t mean there isn’t a lot to like on Shake Your Money Maker.

The album kicks off with Twice As Hard and the way the two guitars seem to talk to each other underneath the vocal is very nice indeed, a blues rock sound that many went for without ever quite reaching, including in 1990 Poison. Jealous Again is another bluesy inspired slice of niceness with some beautiful piano from Chuck Leavell. Sister Luck is a mixed bag, wants to be an epic rock ballad but also stay bluesy and doesn’t quite work but Steve Gorman’s drums do come to the fore, on most of the album he’s restricted to simplicity but gets to show off a bit here. Could I’ve Been So Blind is a bit filler for my taste but Seeing Things takes a sharp left turn into some organ goodness and a really mellow church vibe throughout which was wonderful.

Who doesn’t love track 6? Hard to Handle, one of the most fun songs to cover. I love playing it myself, I love listening to it, and there’s no doubt it got the Crowes most of their fan base. Thick n’ Thin starts with a car crash, then goes very Status Quo and sounds a little like a jam night at your local, which is probably why I like it. She Talks to Angels is just stunning. It’s beautiful, melodic and melancholy, obviously a song close to heart of the band that is a story they relay in a wonderfully touching way. Struttin’ Blues is one of the rockiest tunes on the album and very early Aerosmith and yet modern at the same time. The organ again the star. Stare It Cold closes out what is essentially a very good album, a superb debut effort but definitely lacking in some gravitas... and lacking Remedy which is still two years away at this point.