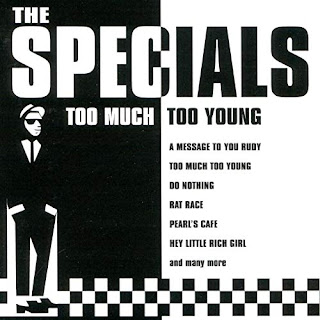 Inspired by our series of articles looking back at music released 30 years ago, Jimmy Hunter takes a step further back in time to give us a Song of the Day 1980. This week, he can never have Too Much (Too Young) 2 Tone...

I wrote this then changed my mind and re-wrote it. My original choice is here but I was chin-scratching all the way through the thought process and the writing. So, I changed my mind. My second choice involves quite a lot though so don’t think it was easy to change. It was also a record I loved instantly then and still do and I could rattle on for pages about it, its history etc. Indeed I did.

But I changed my mind [You’ve already said that, twice – Ed]. I just love 2 Tone too much and the choice became as clear as a shining star once I’d actually approached it from different angles. Yes dear reader, this week we’re listening to Too Much Too Young by The Specials.

Ok, so I did a review of The Specials last year and 2 Tone also featured when I raved about the Selecter. You’d therefore be forgiven for thinking we’d laboured the point somewhat. Well, you are forgiven and no we haven’t. I welcomed 2 Tone more than any other genre since Disco (up to this point) as it reflected a very disgruntled Britain during times that were even harder, if that’s possible with amazing creativity and fantastic music and lyrics.

Leading the charge were, among others, The Specials. Based on a 1969 record, Birth Control by Jamaican ska and reggae artist Lloyd Terrell, this song is a definite, loud shout out to society about teenage pregnancy and I think the lyrics are masterful:

Ain't he cute?
No he ain't
He's just another burden
On the welfare state

Don’t be bogged down with a kid you don’t want so use birth control!

Barely a year after this, Terry Hall and a couple of bandmates would depart and form Fun Boy Three and although good, I don’t think it had the razor sharp edge that The Special A.K.A. had. Listen for yourself …