Review - Death of a Salesman 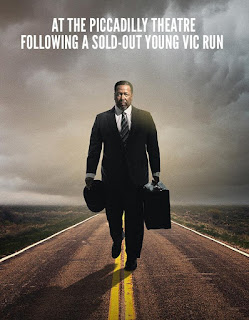 Tony Cross watched Death of a Salesman at Piccadilly Theatre in London...

I have seen Death of a Salesman before, so I know how it ends. Yet, this production broke me. It’s a testament to the strength, not just of Arthur Miller’s writing, but the direction of Marianne Elliot and Miranda Cromwell and the performances of a fantastic cast.

At the centre of that cast is Wendell Pierce as Willy Loman and Sharon D. Clarke as Linda Loman. And those two performances are brilliant, both technically and emotionally. Pierce’s Loman is more obviously already a broken man at the beginning of the play, the events of which just pull the threads of his fraying dignity to pieces. Clarke’s Linda can see what is happening to her husband and her family. She can see where it will end. Her attempts to stop it will be futile, but the love is in the attempt. Clarke is superb.

Pierce and Clarke are more than ably supported by Sope Dirisu as Biff Loman. Biff believed in his father until events in a Boston hotel cracked that illusion. He calls his father a ‘fake’. The play indicates that this is the moment that Biff’s life changed forever. He gave up. But there’s also the possibility that it is also the moment that began Willy Loman’s decline too.

Natey Jones plays Happy Loman. He’s a feckless womanizer holding down a small job. He’s ticking along. He hasn’t explicitly seen through the illusions his father has put out there, but that might be because his father’s favourite was always Biff so Happy grew up in that shadow. Both Sope Dirisu and Natey Jones are excellent.

I’ve not said anything so far about the fact that this production, originally at the Young Vic, is one where the Lomans are a black family. Willy Loman has always been an everyman. The clue is in the name but making them a black family reinforces the social commentary. Scenes play out with a different emphasis. When Howard (Matthew Sedon-Young) flinches when Willy puts his hand on his shoulder his reaction feels as much about race as it does about the cheek of it. It also adds an extra frisson to his affair with ‘The Woman’, who is white. An inter-racial relationship might have been a little risky in 1940s Massachusetts, even ignoring the basic betrayal involved. And it makes Loman’s odd relationship with his friend Charley (an excellent performance from Trevor Cooper) seem more understandable.

The sets are a skeletal minimal. Window frames, desks and chairs. There’s a real emphasis on Loman’s breakdown as his ability to distinguish between the past and the present breaks down. Although occasionally this does feel like it is over-egging a pudding. But this is the merest quibble. This is a fantastically moving production of a great play. It might be that as someone whose day job is sales related – but without the hassle of driving hundreds of miles to get to my territory – that this really hits home. There are lines that really resonate for me, but sales is just a hook to hang a story of the ordinary man and his fate in a hard world.