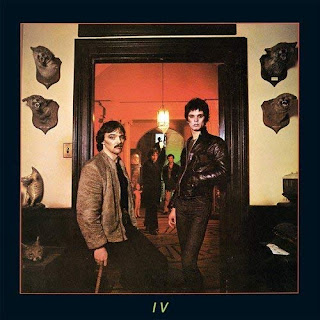 For our Rats theme day, Marc Nash looks back to the The Stranglers first album Rattus Norvegicus...

Let’s have one thing straight about the Stranglers’ 1977 debut LP, it’s almost certain that it would never be released today. The rampant misogyny running through the lyrics of songs like “Peaches”, “Ugly”, “London Lady” and “Princess Of The Street”, would make even potty-mouthed hardcore rappers blush. Maybe this is why the band do penance, by occasionally dressing up in women’s clothing and stage bombing other acts on their bill these days.

So I can really only talk about the music, (an instrumental or even a dub version of this album would be a thing of beauty). But before that, let’s try and clear up a couple of buried visual references. The cover shows the band posing through doorways in one of those Victorian explorer’s houses, with four mounted animal heads crowning them. Augur of their own fate as scruffy adventurers in the rarified atmosphere of Pink Floyd and Led Zeppelin dominated rock scene perhaps ? A spooky outlined fifth figure looms at the back. But the only writing on the front cover is the band’s name and the roman numeral IV. Was this an oblique reference to Led Zep’s penchant for the same on each of the first four of their albums? So the LP has an alternative title, that of ‘IV’, despite it being their debut. As to ‘Rattus Norvegicus”, this is the taxonomic Latin name of the humble brown rat, while the silhouette of the rat on the back cover became the band’s enduring logo. Given that the last track on the album was an epic workout called “Down In The Sewer” and plays out with squeaking rats, ‘Rattus’ became the album’s commonly accepted name rather than ‘IV’.

In the cover photo, Bassist JJ Burnel looks like a Bowie/Bolan figure, in leather jacket and blusher, while keyboardist Dave Greenfield looks like he’s queuing for an audition in either a 70’s Cop Drama, or a porno. The Stranglers were not purveyors’ of designer street warrior chic like the Pistols and The Clash. But then they weren’t really punk. Like so many others, they were hard working pub rockers, playing the circuit of about six London pubs that served as the venues a the vertiginous next step down from proper concert venues. Boards trodden by Ian Dury, Wreckless Eric, Nick Lowe and Joe Strummer’s pre-Clash rockers The 101ers. Punk enabled them all to burst out of the pub rock niche, but it meant they were perhaps more rooted in the spit and sawdust aesthetic than the art school types like the Pistols, The Rezillos and Adam And The Ants.

But what it meant in the case of The Stranglers, is that their sound was already well honed through gigging. This album was not written in the studio, rather it took just a week to record what was a chunk of their live set. And this is also what distinguishes them from the primitive, primordial 3-chord punk riffs of The Damned and The Ramones. From the opening to track 1 “Sometimes”, the music is accomplished, the drive of Burnel’s bass and Greenfield’s keyboards up front and centre. Rather than the organ doing the noodling, it tended more to be Hugh Cornwall’s guitar. This bass-organ combo provided the energy propelling each song along, wrapped in the multi-layers of the magic being produced my Greenfield’s octopus-like arms across several keyboards. A sort of Rick Wakeman, but with menace and without the wizard hat.

The compositional elements of the strongest songs, “Hanging Around”, “Get A Grip On Yourself” and “Down In The Sewer” are almost orchestral. (There were always rumours that Greenfield was playing the bass parts through his keyboards and that Burnel was just miming). However, Burnel’s solo album two years later puts the lie to this, unless Greenfield was stashed away in the recording studio. The bass was the dirtiest sounding thing I’d ever heard up to that point and took more of a leading role than the drums. Cornwell’s voice was gruff and authentic, unlike the pantomime half-talking whine of Johnny Rotten. So when the Stranglers sang of street walkers, hanging around in grimy pubs and London itself as being a sewer, it sounded like they’d had considerable first-hand experience of this. Yet they weren’t just Neanderthal thugs, with references to Nostradamus and Shelley’s “Ozymandias” in the lyrics. Just looking at the song writing credits, the nastier songs targeting women, seem to have been written by Burnel, suggesting that Cornwell was the literary soul in the band.

The album is patchy, largely because you kind of have to close your ears to the words at various points, but the overall effect is of music that snatches you by the nape of your neck and flings you across the room. It is hot and heavy, fueled by anger and pent-up aggression rather than sex, but for all that, way more authentic than the punk mannequins snarling like they’d been taught at art school, that were so many of their contemporaries. It’s not a perfect album by any means, but the strong songs and the throb of the music absolutely hold up over 40 years later.

A mere year later, there was a dustmen’s strike in London and rubbish bags piled up in the street. A field day for rats. The Stranglers’ music had soundtracked that twelve months before its actual manifestation.