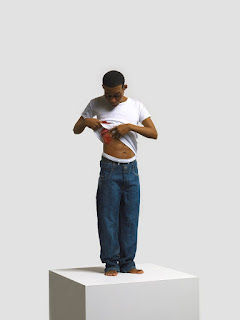 The first exhibition in the UK exploring sin in art has been rescheduled to start next month in the National Gallery in London ...

Originally planned for Spring 2020, Sin will bring together paintings from the National Gallery’s collection dating from the 16th to the 18th century with loans from important private and public collections including modern and contemporary works by Andy Warhol, Tracey Emin, and Ron Mueck. There will be 14 works on display.

Sin has been a recurrent subject for artistic exploration over the centuries across the world. Sin in a religious context means an immoral act that is considered to be a transgression against divine law. In a secular world, it means a serious or regrettable fault, offence or omission. Sin is as universal as it is personal. Most people at some point in their life will do something they regret, although the gravity of their ‘sin’ and the way each individual or society deals with it very much depends on the country, time and socio-cultural context. While the concerns, ambiguities, perceptions and representations of sin extend across world religions and even to those of no faith, 'Sin' will primarily explore this conception in Christianity and through the work of artists who work principally within a Christian context.

Two early paintings in the exhibition, 'The Garden of Eden' by Jan Brueghel the Elder, 1613 (on loan from a private collection, Hong Kong) and 'Adam and Eve' by Lucas Cranach the Elder, 1526 (on loan from The Samuel Courtauld Trust, The Courtauld Gallery, London) feature scenes from the Old Testament which have helped define the concept of sin in our collective ‘Western’ consciousness: the moment described in the Book of Genesis when Adam and Eve eat the forbidden fruit from the tree of knowledge and are subsequently expelled from the Garden of Eden for committing the first sin. Both pictures are ambiguous as they tell and warn the viewer about sin and yet portray the naked body as seductive, and a potential source of temptation.

Many artists over the centuries have sought to depict the seven deadly sins (pride, greed, lust, envy, gluttony, wrath and sloth), the group of sins defined as the worst by the sixth-century pope, Gregory I (Saint Gregory the Great). 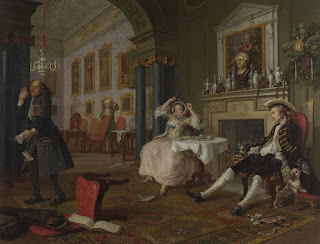 The 18th-century British painter William Hogarth was a master at depicting sinful behaviour. In his 'Marriage A-la-Mode' series, and in particular in 'The Tête à Tête', about 1743 (the National Gallery, London), he shows a young ‘couple of convenience’, sprawled slothfully in their Palladian London townhouse. The wife has tea for one, an indication of the separate life she leads from her husband. The husband, meanwhile, does not even try to hide his mistress’s cap as it falls out of his pocket, attracting the attention of his curious dog. A large black spot on his neck denotes he has caught syphilis, presumably from his mistress.

While many paintings depict sinful behaviour, some portray people who were regarded as being without sin, notably the Virgin Mary, the mother of God’s son Jesus. Her purity is equated with her beauty in Diego Velázquez’s 'Immaculate Conception', 1618–19 (the National Gallery, London)

Other paintings show acts of redemption, atonement and confession: the options available to cancel out sin. Few artists have addressed repentance as directly as Andy Warhol did in some of his last paintings, based on leaflets distributed in the streets of New York 'Repent, and Sin No More!' (Positive and Negative), 1985-–6 (Ed Freedman, Los Angeles, CA, USA).

Some works in the exhibition shed light on the power of confession, either to free oneself from the burden of sin or to obtain forgiveness. 'The Mass of Saint Giles', about 1500 (the National Gallery, London) shows the Holy Roman Emperor Charlemagne kneeling in front of Saint Giles, whose prayers of intercession to God led to the absolution of the Emperor from his sins. Tracey Emin’s neon work 'It was just a kiss', 2010 (Exhibition Copy, Courtesy of the Artist and White Cube) could be considered an open-ended and ambiguous secular confession.

A painting entitled 'The Scapegoat' by William Holman Hunt (1854–5, Manchester Art Gallery) explores another solution to get rid of sin: the idea of blaming someone for the faults of others. The origin of the theme is found in the Old Testament Book of Leviticus. Christians believe that Christ’s death on the cross, as the ultimate scapegoat, atoned for humankind’s sins once and for all.

'Youth', 2009 (Pictured top, courtesy the artist) a sculpture by Ron Mueck, invites us, on leaving the exhibition, to continue to reflect on the enduring and universal nature of sin. 'Youth' is ostensibly a victim of a stabbing, but asks more questions than it answers. It evokes the image of Christ showing his sacrificial wound to Saint Thomas the Apostle, and prompts us to ask whether the youth has committed a sin or if instead he is a victim of someone else’s sins? Is he a scapegoat, or indeed another ‘Christ’?

'Sin' will also include paintings by Jan Gossaert, Jan Steen, Bronzino, and the Gallery’s recently acquired 'Venus and Cupid' (1529) by Lucas Cranach the Elder.

Dr Joost Joustra, The Howard and Roberta Ahmanson Fellow in Art and Religion, said, ‘Sin invites visitors to reflect on a fundamental concept that pervades our lives and history, but also to marvel at the ingenious ways artists have addressed the subject across time.’

Dr Gabriele Finaldi, Director of the National Gallery, added, 'Sin is a deadly serious subject and artists over the centuries have treated it with imagination and inventiveness. This small exhibition packs a big punch and will, I hope, lead to much discussion and reflection on the meaning and imagery of sin.'