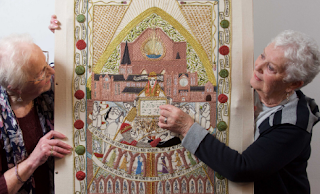 After 1,950 hours of needlework, the final stitches of The Arbroath Tapestry have been sewn by a highly-skilled group of Angus embroidery and textile artists...

Created as part of the Arbroath 2020 celebrations, the intricate, three-panel tapestry was handed over to the safe-keeping of Historic Environment Scotland where it was unveiled at a special reception at The Scottish Parliament. The tapestry will be on long term display in Arbroath Abbey from early April to coincide with the 700-year anniversary of the Declaration of Arbroath.

“The Arbroath Tapestry commemorates the 700th anniversary of the Declaration of Arbroath and the history and heritage of Arbroath Abbey so we’re absolutely thrilled it’s to become part of the Abbey’s collection,” said Linda Walker, one of the nine embroidery and textile artists who worked on the tapestry.

Alex Paterson, Chief Executive of Historic Environment Scotland (HES), who manage Arbroath Abbey, said, “We’re delighted to be receiving the Arbroath Tapestry and making it part of the Abbey’s continuing story. This amazing piece of craftmanship not only tells the story of the Declaration of Arbroath but also covers key moments in the history of the Abbey right up to the present day. This magnificent Tapestry doesn’t just pay tribute to the importance of the Declaration – it also shows how the people of Arbroath are working together in imaginative ways to celebrate the extraordinary history of their town and its Abbey.”

Angus South MSP Graeme Dey who hosted the event in Parliament, added, “The painstaking work, stretching to almost 2,000 hours in total, on the part of Linda Walker and her team has produced a stunning tapestry which memorably captures the history of the Declaration and all it stands for. I’m in no doubt the Tapestry will prove a real crowd puller when it goes on display in the Abbey and everyone fortunate enough to see it, will I am sure marvel at the dedication and skill which has gone into creating it.”

The Arbroath Tapestry’s three richly-coloured panels were designed by Andrew Crummy, designer of the Great Tapestry of Scotland.

“The central panel portrays Robert the Bruce and Abbot Bernard of Arbroath writing the Declaration,” explains Linda Walker. “The two smaller panels represent the role and influence of the Abbey within Arbroath. The left panel features William I, founder of the Abbey, along with a fisherwoman, highlighting the importance of the local fishing industry. The right panel represents the many trades which were involved in building and maintaining the Abbey and depicts two Scottish nobles setting sail to deliver the Declaration to Avignon.”

Before starting work on the Tapestry, the projects embroidery and textile artists carried out in-depth research on medieval threads, dyes and stitches. “We were determined to reflect the materials, colours and style of the tapestries which once adorned the walls of Arbroath Abbey,” said Linda Walker. “It’s wonderful that the Arbroath Tapestry will be resurrecting this medieval tradition when it goes on display in the Abbey in April.”

The tapestry is decorated with Arbroath’s unique Oslin apples, introduced to the area by the Abbey’s monks, and 46 seals of the barons who ‘signed’ the Declaration of Arbroath. “These seals were very tricky as they’re small and very detailed – and had to be accurate depictions of the seals on the original Declaration,” reveals Linda. “Each seal involved hours and hours of research before we even started stitching.”

For more information about the Arbroath Tapestry and the Arbroath 2020 celebrations, visit arbroath2020.com.
Email ThisBlogThis!Share to TwitterShare to Facebook