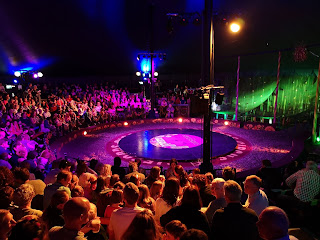 Barnaby Eaton-Jones looks back, in rhyme, to a summer day, to reaching Xanadu with Giffords Circus and to the memory of its shining light, the late Nell Gifford...


“Roll up, roll up!” says the naughty hippy,
With a policeman performing a dance.
The audience stare in wonder and awe,
As if in a psychedelic trance.

For where the line blurs from reality,
Is inside Gifford’s Big Top Tent.
A ticket to sit along for the ride,
Is time-travelling money well spent.

I took a trip and I found Xanadu,
A show that defined 2019 for me.
I wanted to write a review straight away,
But the words danced teasingly.

How could I put down on a page,
The visual spectacle that unfolded,
The culmination of many years,
Of a circus that Nell Gifford has moulded. 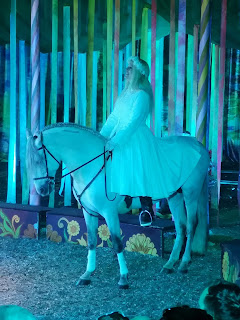 With news of her untimely passing,
The need to write become stronger.
The words reformed and pushed to get out,
I could hold them back no longer.

Gifford’s is Nell’s spell of magic,
Under Cal McCrystal’s enveloping direction.
The sights, the sounds, the smells,
Is her heritage under protection.

Wherever she’s travelled, above the stars,
It’s clear that she will be.
Always a presence in so many lives,
With her ongoing artistic revelry. 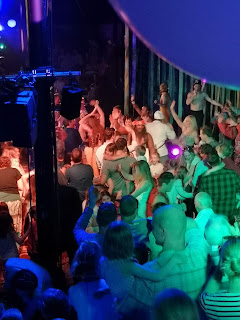 What did she show this year so well,
Why did I think this was such a feat?
It’s the vision and the theme personified,
Coming together in one perfect treat.

Juggling, acrobatics, high-wire acts,
Were all present and correct.
But interwoven in a beautiful tale,
Which is something I didn’t expect.

An over-arching theme of freeing yourself,
From the bourgeois realities of life.
Exemplified by the buttoned-up representation,
Of a man, his daughter and his wife. 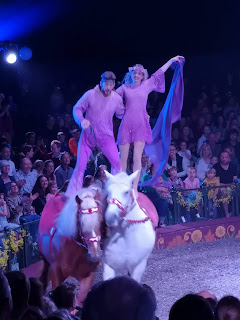 The choreographed fight of strong balletic grace,
Between the establishment and those out of reach.
Was how the circus avoided, in deploying these themes,
A thoughtful discussion rather than something to preach.

Anchored by a mystical guru, with flowing robes,
Peace and love settled on each arm.
It was truly a message for the world to unite,
Emitting from their base at Fennells Farm.

The majestic white horse, proud and strong,
With a clothed Lady Godiva atop.
Nell Gifford, commanding a presence as ever,
But with a grin that just wouldn’t stop. 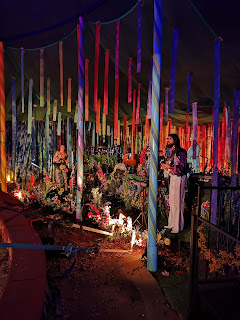 The band whipped up a frothy concoction,
A musical odyssey of a journey to be moved.
Tight as a pair of Jim Morrison’s leather trews,
They ebbed and flowed as they grooved.

And then there is Tweedy who anchors it all,
Though his anchor is often untethered.
If you’re within his reach of mucky slime,
Prepare to be tarred and feathered.

A clown who’s patter we’ve come to embrace,
“It’s all dirty!” and “Wipe it off!” have become lore.
His bendy frame like a crazed marionette,
As he pulls his pet iron across the sawdust floor.

A gathering bow for the finale of the show,
Where the audience’s love-in becomes real.
The performers dancing with the punters who came,
And the love and joy is palpable to feel.

Although she was taken way too soon,
A spirit so unique, so brave and so true.
I hope she’s found her own paradise,
Nell Gifford is forever in Xanadu.

Find out more about Giffords Circus and the plans for next year's show here and read Barnaby's interview with Tweedy the Clown here.