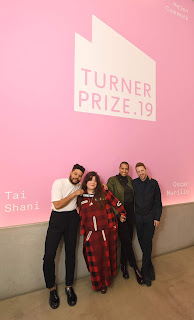 On Monday evening, the Turner Prize announced this year's winner... or, rather, winners. Find out more about them...

The Turner Prize 2019, presented in partnership with Tate and Turner Contemporary, has been awarded to a collective bringing together the four nominated artists: Abu Hamdan/ Cammock/ Murillo/ Shani. The prize was presented by Edward Enninful, Editor-in-Chief of British Vogue, at a ceremony broadcast live on the BBC from Dreamland in Margate.

The four nominees – Lawrence Abu Hamdan, Helen Cammock, Oscar Murillo and Tai Shani – came together to request that the jury consider awarding the Prize to them as a collective. In recognition of these artists’ shared commitment to urgent social and political causes, the jury unanimously decided to honour that request.

In a joint letter to the jury, the artists said: ‘At this time of political crisis in Britain and much of the world, when there is already so much that divides and isolates people and communities, we feel strongly motivated to use the occasion of the Prize to make a collective statement in the name of commonality, multiplicity and solidarity – in art as in society.’

The jury praised the artists for their commitment to the collective power of art. They noted that this unique and timely act of solidarity encapsulates the very reasons for which these four artists were nominated in the first place, as demonstrated in the works they exhibited at Turner Contemporary.

The jury said:“At our meeting today, we were presented with the letter from the artists and unanimously took the decision to agree to their request. We are honoured to be supporting this bold statement of solidarity and collaboration in these divided times. Their symbolic act reflects the political and social poetics that we admire and value in their work.”

Alex Farquharson, Director of Tate Britain and chair of the Turner Prize jury, said: “In coming together and presenting themselves as a group, this year’s nominated artists certainly gave the jury a lot to think about. But it is very much in the spirit of these artists’ work to challenge convention, to resist polarised world views, and to champion other voices. The jury all felt that this made the collective a worthy winner of the Turner Prize.” 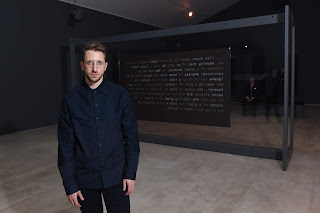 Lawrence Abu Hamdan is an artist and audio investigator, whose work explores ‘the politics of listening’ and the role of sound and voice within the law and human rights. He creates audiovisual installations, lecture performances, audio archives, photography and text, translating in-depth research and investigative work into affective, spatial experiences. Abu Hamdan works with human rights organisations, such as Amnesty International and Defense for Children International, and with international prosecutors to help obtain aural testimonies for legal and historical investigations. He is a member of Forensic Architecture at Goldsmiths London where he received his PhD in 2017.

He has been nominated for his solo exhibition Earwitness Theatre at Chisenhale, and the video installation Walled Unwalled and performance After SFX at Tate Modern, London. These projects evolved out of earwitness interviews that the artist undertook with former detainees of the Syrian Regime prison Saydnaya, as part of an audio investigation by Amnesty International and Forensic Architecture. Subjected to total sensory deprivation and forced to live in darkness, Abu Hamdan used sound effects to help six survivors recall their audio memories, to map the unknown architecture of the prison and to understand what happened there. 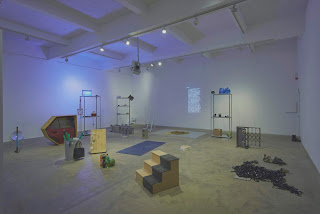 The sound installation, Saydnaya (The Missing 19db) addresses silence as both a form of violence and evidence. Within a pitch-dark space, survivor testimonies are interspersed with re-enacted whispers. At Chisenhale, this was shown alongside Earwitness Inventory, an installation of 95 objects designed to create the sound effects of contested sonic evidence in multiple legal trials. The sounds themselves formed the backbone to After SFX, a performance lecture at Tate Modern, exploring the relationship between sound, image, memory and truth in these trials.

Exhibited in the Tanks at Tate Modern, the video installation Walled Unwalled interconnects legal cases where evidence was witnessed only through walls, often using new technologies which raise questions around privacy and unequal human rights. These explorations are physicalised through Abu Hamdan’s monologue and performative actions within a set of three interlinking sound studios in East Berlin. 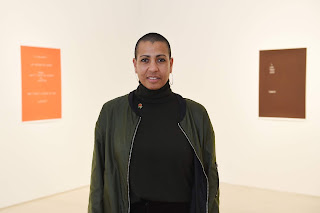 Helen Cammock works across film, photography, print, text and performance. She produces works stemming from a deeply involved research process that explore the complexities of social histories. Central to her practice is the voice: the uncovering of marginalised voices within history, the question of who speaks on behalf of whom and on what terms, as well as how her own voice reflects in different ways on the stories explored in her work.

Cammock’s practice is characterised by fragmented, non-linear narratives. Her work makes leaps between different places, times and contexts, forcing viewers to acknowledge complex global relations and the inextricable connection between the individual and society.

She has been nominated for her solo exhibition The Long Note at Void Gallery, Derry (2018) which was subsequently exhibited at Irish Museum of Modern Art, Dublin (2019). Commissioned by Void, The Long Note is a film which explores the history and role of women in the civil rights movement in Derry Londonderry in 1968, a period generally acknowledged to be the starting point of the Troubles - the Northern Ireland conflict that spanned the 1960s through to the Good Friday Agreement of 1998. 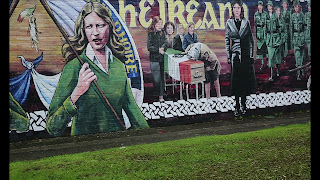 The Long Note sets-out to expand and complicate narratives around this period, placing women's voices at the fore. The film weaves together various archive materials, newly produced footage and a series of interviews Cammock made with women active in the movement, as well as those affected by it. Cammock’s non-didactic interview style allows her subjects to speak, without heavy editing or direction, presenting a reality which is convoluted and open-ended. A very particular place and moment in time is thus used as a vehicle to reflect upon broader civil rights struggles globally, as well as subtly eluding to the many ways in which these same struggles continue in different forms today. 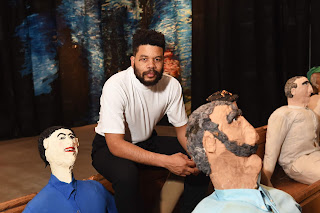 Oscar Murillo’s multifaceted practice incorporates live events, drawing, sculptural installation, video, painting, bookmaking and collaborative projects with different communities. In his work, Murillo particularly explores materials, process and labour; as well as issues of migration, community, exchange and trade in today’s globalised world. These concerns are deeply embedded in Murillo’s personal history and creative process. The artist pushes the boundaries of materials in his work particularly in the creation of his collaged-together, unstretched canvases often made with recycled fragments from the studio. Emigrating to London from Colombia aged 11, Murillo draws on his own biography and that of his family and friends, who are often involved in his performances. References to life, culture and labour conditions in the factory town of La Paila where he grew up, reappear throughout his work. 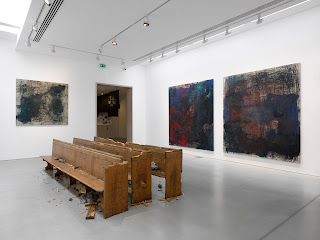 He has been nominated for Violent Amnesia at Kettle’s Yard, Cambridge; Oscar Murillo/Zhang Enli at chi K11 art museum, Shanghai; and his participation in the 10th Berlin Biennale. At the Berlin Biennale, Murillo installed industrial ovens to produce sculptures made of corn mixed with clay, resembling rocks or bread, in a work addressing consumption, labour and basic human sustenance. The sculptures were piled up in heaps or bulged out of intestine-like forms, along with stuffed cloth torsos, printed with workers’ slogans and international trade routes.

Murillo’s Institute of Reconciliation (2014 – ), shown in his solo exhibition at Kettle’s Yard Cambridge and at the chi K11 art museum, Shanghai is an ongoing work comprising multi-media installations of black canvases. This work originated from a night flight Murillo took from Tel Aviv to Baku. He became aware of a dead body in the hold, being transported home by family members, and of the plane’s route to avoid conflicted territories. The black canvases are symbolic of mourning, conflict, inequality and oppression in the contemporary world. 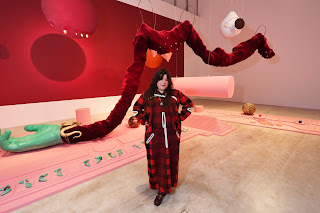 Tai Shani has been nominated for her participation in Glasgow International 2018, solo exhibition Tai Shani: Semiramis at The Tetley, Leeds and participation in Still I Rise: Feminisms, Gender, Resistance at Nottingham Contemporary and the De Le Warr Pavilion, Bexhill-on-Sea. These exhibitions centre around Shani’s on-going project DC, developed by the artist over a four-year period. The work is made up of multiple characters which explore mythical and real women in an expanded adaptation of Christine de Pizan's 1405 pioneering proto-feminist book, The Book of the City of Ladies. Shani uses the structure of an allegorical city of women to explore ‘feminine’ subjectivity and experience, through a gothic/science-fiction lens. Adopting de Pizans’ medieval conception of history, where historical events, fictions and myths are entwined, DC draws upon a host of references, tropes and characters from disparate sources, creating an elaborate world, outside of time and beyond patriarchal limits. 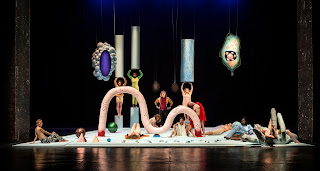 Jointly commissioned by Glasgow International and The Tetley, in collaboration with Nottingham Contemporary, DC: Semiramis brings together the full roster of 12 characters, to create an epic tableaux vivant. At Glasgow International and Nottingham Contemporary the striking sculptural set was activated over a number of days with performances, each focusing on a different character from the series. At The Tetley, the work took the form of installations comprising an immersive set alongside a complete archive of the DC project, including video documentation of all twelve performances, texts, posters and a radio play.


About the Turner Prize

One of the best-known prizes for the visual arts in the world, the Turner Prize aims to promote public debate around new developments in contemporary British art. Established in 1984, the prize is named after JMW Turner (1775-1851) and is awarded to an artist born or based in the UK for an outstanding exhibition or other presentation of their work in the past twelve months.

The 2019 edition of Turner Prize is the first time that the venue for the exhibition, outside of London, has had a direct connection with JMW Turner. Turner Contemporary stands on the site of the artist’s lodging house and enjoys views of the skies that Turner felt were ‘the loveliest in all Europe’.

The members of the Turner Prize 2019 jury are Alessio Antoniolli, Director, Gasworks & Triangle Network; Elvira Dyangani Ose, Director of The Showroom Gallery and Lecturer in Visual Cultures at Goldsmiths; Victoria Pomery, Director, Turner Contemporary, Margate and Charlie Porter, writer. The jury is chaired by Alex Farquharson, Director of Tate Britain. Next year the prize will return to Tate Britain.

Turner Contemporary is working with partners across Kent to make Turner Prize 2019 an unforgettable moment for audiences from Margate, Kent and beyond. The exhibition of the four shortlisted artists at Turner Contemporary has already been seen by almost 100,000 visitors, making it one of the most popular Turner Prize shows outside London. The exhibition, curated by Rowan Geddis and Fiona Parry, continues until Sunday 12 January 2020. Entry is free.