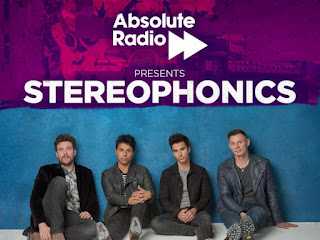 Stereophonics have announced that they will play a special London gig next month at the O2 Forum Kentish Town, hosted by Absolute Radio...

Taking place on 21st January, it will be a chance to see the band ahead of their UK arena tour later this year.

Absolute Radio presenter, Dave Berry said “We all know January can be a dull month after all the excess of the Christmas period. So Absolute Radio have enlisted rock royalty, Stereophonics to help shake things up a bit with this extra special London gig. If your New Year’s resolution is to get out to more gigs, what better way to start off than at this one?”

Speaking to Dave on his Breakfast Show earlier this week, Stereophonics singer Kelly Jones shared that he was excited to make a return to the London venue. He said “We haven’t played the Forum since we opened up for The Manics on our very first tour… It must have been 1997?! We’ve maybe done one headline show there – but I haven’t been there for a very long time… We used to play The Bull and Gate Pub next door a lot though!”

The exclusive gig follows the release of the band’s eleventh studio album, Kind, which topped the UK charts earlier this year.

Here's their latest video from the album, Don't Let The Devil Take Another Day


Tickets for January’s Stereophonics show are priced at £44 including booking fees, and go on sale TOMORROW, Thursday 12th December from 9am, available from www.absoluteradiotickets.co.uk