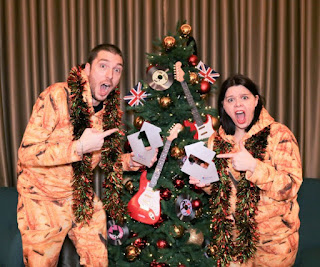 LadBaby is officially on a (sausage) roll as he is crowned the UK’s Official Christmas Number 1 for a second year in a row and sets a new chart record...

YouTuber and dad blogger Mark Hoyle, along with his wife Roxanne and their two sons, proves that lightning CAN strike twice, taking the coveted festive top spot on Friday with I Love Sausage Rolls - a playful twist on Joan Jett’s I Love Rock ‘n’ Roll. Money raised from the single goes to foodbank charity The Trussell Trust, who support a network of food banks across the UK and provide emergency food and support to people locked in poverty.

According to Official Charts Company data, I Love Sausage Rolls smashes last year’s total too, scoring a huge 93,000 chart sales this week (18,000 more than last year’s winning track We Built This City) – and with 85,000 of that total coming via digital purchases, LadBaby not only claims the festive chart crown, but also the fastest-selling download of the year, in fact the fastest-selling download since June 2017’s Artists For Grenfell chart-topping charity single.

Celebrating the news, LadBaby said “How have we done this again? It’s the best feeling in the world - it’s a Christmas miracle yet again! Thank you everybody for supporting us once again, and all for an amazing cause. It’s going to the Trussell Trust – to the 14 million people living in poverty in the UK. Who doesn’t love a sausage roll at Christmas?”

Martin Talbot, Chief Executive, Official Charts Company added “Congratulations to Ladbaby. It is a superb achievement to score an Official Christmas Number 1 once, let alone twice in successive years. And to do so with increased sales year-on-year is quite phenomenal – and all for a fantastic cause.

"Of course, commiserations to Stormzy, Lewis Capaldi, Dua Lipa and Wham! who made up the Official Top 5 in what has proven to be a genuinely competitive race, which has ended up spanning generations and genres.”


LadBaby beat Stormzy’s Own It ft. Ed Sheeran and Burna Boy to the Number 1 spot, holding at Number 2, while a strong challenge from Wham!’s Last Christmas sees the 35-year-old festive classic finish at Number 5. The track is the best seller of the week on vinyl, topping this Official Vinyl Singles Chart with just under 5,000 sales after being given a limited edition 7” release. Last Christmas originally peaked at Number 2, missing out on the Christmas Number 1 in 1984 to Band Aid.

Another Christmas essential [and AlbieMedia favourite], Mariah Carey’s All I Want For Christmas Is You, is at Number 8, marking its return to the Top 10 for a fourth consecutive year.

Over a third of this week’s Top 40 is made up of new and classic festive songs, including Pogues’ Fairytale of New York ft. Kirsty MacColl (14); Shakin’ Stevens’ Merry Christmas Everyone (16); Band Aid’s Do They Know It’s Christmas (17); Elton John’s Step Into Christmas (19); Michael Buble’s It’s Beginning To Look A Lot Like Christmas (24); Leona Lewis’s One More Sleep (25);

A last-minute challenge to get Jarvis Cocker’s political song Running The World into this year’s Official Christmas Chart narrowly misses out on the Top 40, landing at Number 48. Meanwhile, Stormzy lands two new entries in the Top 40 from his new album Heavy Is The Head: Audacity ft. Headie One enters at Number 6, and Lessons lands at Number 9.


ALBIEMEDIA EDITOR'S NOTE - There was one festive song that didn't quite manage to make it into the charts, although it wasn't through a lack of trying. Listen to Peat & Diesel's version of the Pogues' classic - Fairytale of Stornoway

"You took my sheep from me, when I first found you
I kept them with me babe, I put them with my own
Can’t make it all alone, I’ve built my flock around you"