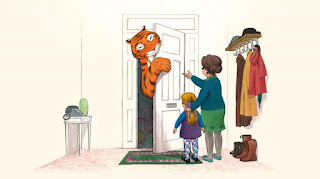 A glittering trio of British musical talent has collaborated on the theme song for Channel 4’s much-anticipated adaptation of Judith Kerr’s classic storybook The Tiger Who Came to Tea. Listen to Hey Tiger...

Multi award-winning composer David Arnold and Oscar-winning lyricist Don Black have penned infectiously catchy tune ‘Hey Tiger!’, which has been recorded for the film by the one and only Robbie Williams.

The song will play over a visually ambitious animated fantasy segment featuring the tiger in a range of never-before-seen locations, imagined from the point of view of Sophie, the little girl who receives an unexpected visit from the tiger.

The music for ‘Hey Tiger!’ and the original score for The Tiger Who Came to Tea, based on the best-selling book by Judith Kerr, have been composed by multi-award-winning composer David Arnold who, among his many credits, has scored five James Bond films and a plethora of films and television shows, including Sherlock.

The song’s lyrics have been composed by Oscar-winning lyricist and BBC R2 DJ, Don Black who incidentally has also provided lyrics for five James Bond films, as well as a number of classic hits, including ‘Born Free’ which won the Academy Award for Best Original Song in 1966. Robbie Williams performs the song with trademark style and personality.

The 18-times Brit Award winner and the UK’s best-selling solo artist, Robbie has hit No. 1 with seven singles and 10 albums, including two swing-influenced releases. The score was recorded and mixed at Air Studios.

Speaking at Sleeper Sounds where the vocals were recorded, Robbie Williams, who is a father of three, said: "This book has played a big part in me bonding with my kids. I’ve read it possibly 150 times to my first daughter, Teddy, and she is the reason I’m singing the song – I’m honouring those moments with her. She loved the book and I got a real heart-warming kick reading a line and her finishing it, so it will be forever in my heart.

"Plus I’m a massive fan of Don Black and it’s an honour to be singing the words he’s written. The song reflects the tiger’s wonderful, magical and mischievous character – it’s whimsical and just what a song should be in this film."

David Arnold, composer, said: “The book is part of the fabric of everyone’s childhood these days and it feels like the film is going to be one of those things people will keep coming back to again and again because it is the book. The music had to be honest and joyful like the film is and I wanted it to feel like I felt when I read that book when I was small, so there’s a slight nostalgia to it. And if there is a human being that knocked on the door and you thought something is going to happen, it could be Robbie – so maybe he’s the tiger!”

Don Black, lyricist, said: “This was a joy to write. It captures a mood of innocence and youth and the delightful tale; it brings a smile and makes you feel young again, if you’re not young already! Robbie is ideal for it because it’s a show song and he’s great with a lyric, he tells a story and he lives a song. It was a dream of David’s and mine for him to sing it and when he agreed I got goosebumps!”

Here's how the song sounds in the trailer:


And here's the song in full:

The soundtrack album of music from The Tiger Who Came to Tea has been released on CD and digital by Sony Music Masterworks and the special airs on Christmas Eve, with the programme going out at 7:30pm on Channel 4.

The Tiger Who Came to Tea was commissioned by Caroline Hollick, Channel 4 Head of Drama and Chloe Tucker, Channel 4 Commissioning Executive, Drama. Produced by Lupus Films' founders Camilla Deakin and Ruth Fielding and executive produced by Ann-Janine Murtagh, Katie Fulford and Mia Jupp at HarperCollins Children’s Books and directed by Robin Shaw (Co-Director - We’re Going on a Bear Hunt, Assistant Director - The Snowman and The Snowdog). The book has been adapted for the screen by Joanna Harrison (Co-Director - We’re Going on a Bear Hunt, Co-Writer and Art Director - The Snowman and The Snowdog). This new animated special will see a team of artists bring to life Judith Kerr's vivid illustrations in Lupus Films' distinctive, hand-drawn animated style. UPHE Content Group is managing the international TV distribution, home entertainment and theatrical rights to the special.

The Tiger Who Came to Tea has sold over five million copies since it was first published by HarperCollins Children’s Books in 1968. Inspired by Judith Kerr’s daughter Tacy, the story of Sophie and her extraordinary, stripy teatime guest has enchanted generations of children and has become a timeless classic.

Find out more about The Tiger Who Came to Tea on our twin site at The DreamCage.