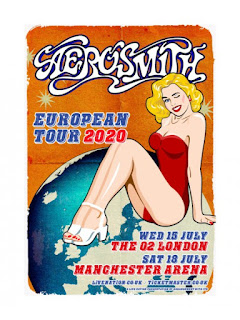 Aerosmith are to play two UK dates in their upcoming tour to celebrate their 50th Anniversary [now who feels old - Ed]...

The one and only Aerosmith, Steven Tyler (vocals), Joe Perry (lead guitar), Brad Whitford (guitar), Tom Hamilton (bass), and Joey Kramer (drums) are a living piece of American music history, having sold more than 150 million albums worldwide, countless awards and been inducted into the Rock and Roll Hall of Fame, there’s not much that this band haven’t accomplished in their five decades since forming.

They are the recipients of endless awards, including four GRAMMYs®, eight American Music Awards, six Billboard Awards, and 12 MTV Video Music Awards, as well as crossing all genre boundaries taking home a Soul Train Award for Best Rap Single for their remix of Run DMC's "Walk This Way." In January, Aerosmith will be honored by the Recording Academy with the 2020 MusiCares® Person of the Year. Along with scores of multiplatinum albums, Aerosmith continues to inspire generations till this day making them one of the most beloved bands of all time!

In 2020, the legacy continues as Aerosmith celebrates the 50th anniversary of their formation by playing a string of European shows across the whole European continent taking them from Italy to Germany. This monumental 50th anniversary European Tour will come off the heels of Aerosmith’s wildly popular Las Vegas residency, AEROSMITH: DEUCES ARE WILD, which kicked off April 6th, 2019 and currently continues through June 4th, 2020. The over 50-date residency at the Park MGM has already earned the group a #1 spot on Billboard’s Boxscore Chart and #2 on the Hot Tours Chart.

Aerosmith’s influence on rock music and the music industry has been undeniable. The band holds several chart and album sales feats, including the second highest number-one singles on the Mainstream Rock Tracks chart for a group with nine, the only number one debut on the Billboard Hot 100 by a rock group with "I Don't Want to Miss a Thing," the most gold albums by an American group, the most total certifications (including gold, platinum, and multi-platinum combined) by an American group, and are tied with Van Halen [who some younger people apparently don't know - Ed] for the most multi-platinum albums by an American group.

Editor's Note: We can't however, promise that this collaboration will happen again on the upcoming tour...

Presale and onsale times vary by region. Please check the info tabs on the tour page for specific times.