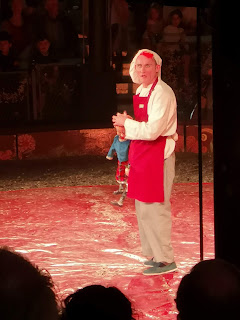 Our own king of clowning around, Barnaby Eaton-Jones, talked to Tweedy the Clown from Giffords Circus...

After seeing him perform in Xanadu for Gifford’s Circus earlier in 2019, I reached out to Tweedy for an interview and got a custard pie in the face. When I’d cleaned myself up, he did it again. Third time lucky, he answered my questions. And then threw one in my face again. He’s a genuine clowning genius, beloved by Gloucestershire, but his reach has been amazing as he’s performed all over the world and on Broadway too.


BARNABY EATON-JONES (BEJ): This year's Gifford's is centred around the hippy idealism of the 1960s, which greatly appeals to me. I've always felt the circus fits so perfectly in that era. Do you recall visiting the circus when you were young and what kind of magic did it (and does it still) hold for you?

TWEEDY THE CLOWN (TTC): I remember my first circus quite clearly. I loved how the clowns acted exactly how I wanted to act and I started calling people silly sausages from then on as I found it so funny. The circus to me always seems like anything could happen, tricks didn't always go right, the juggler might not always catch, etc. These people were human but could do amazing things. I think this is a reason Cirque du Soleil doesn't appeal so much as they seem to take out the human element.


BEJ: The sheer exuberance you bring to performing is catching and lifts the mood of the audience. Who were your inspirations that made you feel that way when you watched them?

TTC: Most of my heroes were actually from film, Laurel and Hardy, Buster Keaton, Norman Wisdom etc. Circus was never my real intention so there isn't really any circus clown inspiration except from film footage of Grock whose act I think has lost a lot of the humour through time. I find him a joy to watch and, prior to seeing the footage, found his books very inspirational. I always liked to make people laugh but was going to go into animation until I realised it needed a lot of patience and actually I wanted to be the cartoon! I was about 16/17 when I realised this and started looking into clowning as it was the closest thing to being an actual cartoon. It was very difficult to find anything out pre-internet. I sent out a questionnaire to various circuses/clown clubs as personal research, I got 2 back, one from a clown in Canada who worked for some show called Cirque du Soleil and one from Zippo the clown, owner of Zippo's Circus. Zippo said the best way to learn is from other clowns and by doing it and offered me a job doing publicity clown. It was there I met Johnny Hutch - he was a huge inspiration. 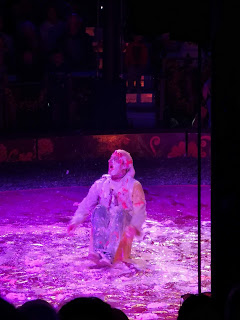 BEJ: Did you get the name 'Tweedy' yourself or was it given to you?

TTC: Originally, I called myself Weedy because of my surname - Digweed - and it was a nickname when I was about 7. But there was already a clown called Weedy, so Zippo suggested Tweedy as it also had a Scottish feel to it. I am Scottish, by the way!


BEJ: I love the way you incorporate the 'classics' in your routines but always seem to be able to put a fresh twist and a new spin on things to make them uniquely yours. Is it a constant battle to make each new routine bigger than before or have ideas always come easy to you from the beginning?

TTC: It is hard coming up with new material (or new to the audience, at least). I do enjoy the challenge but I sometimes envy the clown who travels the world with just a few props opposed to having a storage unit full of different props. Johnny Hutch would say the most original act is the one with the longest memory as they can do old routines that everyone else has forgotten. That's not the case now though as so much is on YouTube.


BEJ: How soggy are your clothes by the end of the show? Ha.


Alan ‘Tweedy’ Digweed, thank you very much for your time.

Find out more about Giffords Circus and the plans for next year's show here.
Email ThisBlogThis!Share to TwitterShare to Facebook