Turn That Noise Down - Whitesnake 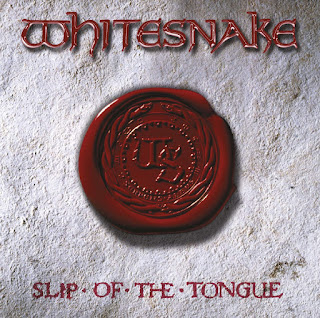 So many well-known albums turn 30 this year and Steve Taylor-Bryant and Susan Omand travel back to 1989 to revisit some of the sounds of their youth that made parents shout "Turn that noise down!" This week, Steve hallucinates David Coverdale's hair...

Slip of the Tongue! I remember this, the album that killed hair metal. Well, it might not have done but, very soon after this album, the Nirvana/Pearl Jam train left the station and we got less and less David Coverdale soft pornography videos on MTV, so my blaming Whitesnake might be a flippant attempt at humour but could also be true, I don’t know, I’m hopped up on Lemsip and ibuprofen at the moment so it could still be 1989 for all I know and this entire thing could be an hallucination.

In case it’s not an hallucination and this expired deadline email is actually our Ed flexing those “I’m in charge” muscles [*flexes* - Ed], I’d better tell you a little about Slip of the Tongue. Where do I start? My disbelief that this album somehow spawned four singles? Two would have done, I’m sure, as only Fool For Your Loving and Judgement Day are actually any good and actually sound like a Whitesnake release, and here in lies my problem with Whitesnake. If you have a band name you should have some kind of consistency or be building towards something, if you’re a solo act you can produce what you want but Whitesnake is in essence David Coverdale doing what he wants but under the guise of a band. Too many band member changes in too soon a period of time makes for a mess. I know that sounds contradictory as I love Chinese Democracy by Guns n’ Roses [read that review here - Ed] but to be fair that album took two decades to do a long enough time to forget about Slash at al and Axl had the decency to release a great record, Coverdale really hasn’t. It’s a mish mash of styles, some blues, some straight rock, some Zeppelin influences, a lot of soft pornography and far too much Steve Vai. Don’t get me wrong I think Steve Vai is a hell of a talent but he’s Steve Vai string twiddler extraordinaire not some dude you draft in to make a record with and it makes Slip of the Tongue feel like a scene from Crossroads (see what I did there? I love flu medication) constantly fighting itself for supremacy.

It’s now thirty years old and you can finance David Coverdale’s hairspray with about a million different versions of anniversary releases, but why would you? I haven’t and I am actually high!