Turn That Noise Down - Phil Collins 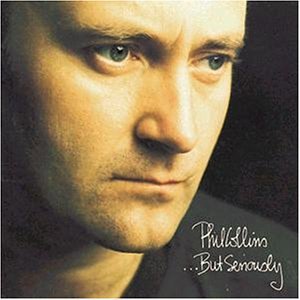 So many well-known albums turn 30 this year and Steve Taylor-Bryant and Susan Omand travel back to 1989 to revisit some of the sounds of their youth that made parents shout "Turn that noise down!" This week, Susan takes things more seriously...

Phil Collins was one of those artists who you took a lot of flak off pals for liking back in the day but I couldn’t help it, I just did. And so, it seems, did everyone else (after all how else could he have dominated the late 80s pop charts as much as he did?) but nobody admitted to it out loud back then. Now, of course, people shout about him from the rooftops and so they should because the ex-Genesis ex-drummer is properly a genius. And nowhere more is that genius in evidence than on But Seriously.

This is Collins’ 4th studio album and, after the mega-hit of In the Air Tonight from Face Value (now sadly more remembered for a gorilla playing drums in a chocolate advert) and the highly commercial fun and froth of his albums Hello I Must Be Going and No Jacket Required, But Seriously had, as the name suggests, a much more mature and contemplative feel. That doesn’t mean that the songs are all ballads, although some are marvelously smoochy, like the stunning I Wish It Would Rain Down with Eric Clapton guesting on guitar. No, instead of melancholy, there are many toe-tappers, with a gloriously upbeat jazzy feel to Hang in Long Enough, a very cool sax solo from Don Myrick at the start of All of My Life (which incidentally features Stevie Winwood on Hammond organ too), and you could positively bop all the way through Something Happened on the Way to Heaven. It’s just when you start to listen to the words themselves you suddenly “get” what the album is all about. There’s global political comment in Colours, looking at the oppression of apartheid in South Africa, and That’s Just The Way It Is reflects on the troubles in Northern Ireland, while Father to Son sees a more personal, introspective turn as he explores his own family connection. Every song on the album really does give you that “But Seriously” pause for thought.

There were six singles all together from the album, spread through 1989 and 1990, but the one that made the biggest impression on the world at the time is the ironically named Another Day in Paradise. It says a lot though that, thirty years on, the heartbreaking homeless situation that the song refers to has, if anything, got worse.