Turn That Noise Down - Bad Religion 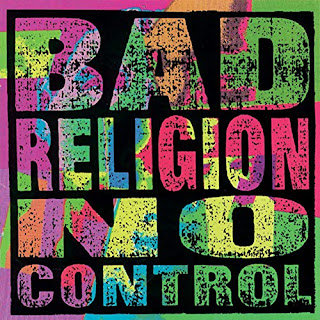 So many well-known albums turn 30 this year and Steve Taylor-Bryant and Susan Omand travel back to 1989 to revisit some of the sounds of their youth that made parents shout "Turn that noise down!" This week, Steve has No Control...

For the first time since we started Turn That Noise Down [which is a few years now - Ed] I have selected an album by a band I know nothing about. Bad Religion totally passed me by, to be fair Billy Joel released an album in 1989 so I didn’t listen to much else, but let’s press play and see what Bad Religion’s No Control is like then shall we?

This. Is. Stunning! I love it, every single track! Automatic Man is the best thing ever, how the hell did Bad Religion pass me by? My apologies to anyone over the years who have mentioned Bad Religion to me and who I have ignored. My apologies to the band, you are excellent, this was the happiest 27 minutes of listening I’ve had for a long time. Right, I’m off to grab Bad Religion’s complete back catalogue and prepare our 1989 Advent Calendar, see you all in 1990!