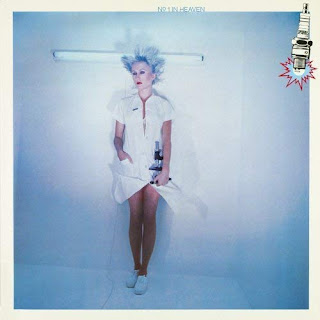 Inspired by our 1989 Turn That Noise Down (TTND) articles, Jimmy Hunter takes a look ten years further back to the music of 1979. This time, he looks back at the Sparks album Nº 1 In Heaven...

Is everything inspired by I Feel Love? Well actually quite a lot of music is / was, certainly in the immediate few years following its release. Don’t groan, I can’t help the sheer volume of records that flew out of Giorgio Moroder’s studio in 1979. But, dear reader, this one is special. Why? Well I got it for my birthday in 1979 but that’s by-the-by. It’s because it blends Moroder’s synthesiser genius with the sheer off-the-wall song writing and performance brilliance of Sparks.

We’re listening to Nº 1 In Heaven. Rather a lot actually.

I could quite easily leave it there and tell you to just listen to it [*taps pencil on desk, irritably* - Ed] but I won’t because this album is full of gems: 40 years on and it’s still giving of those gems.

The album was the result of a chance encounter between Ron and Russell Mael (Sparks) and a music journalist who happened to be a friend of, yes, you guessed, Giorgio Moroder. It was also the result of a lie. In an interview, when the journalist asked “what’s next?”, they answered “we’re working with Giorgio Moroder”. The journalist was delighted and intrigued, told the brothers she knew Moroder. They were somewhat less delighted but a meeting with Moroder was arranged. They may have expressed admiration for I Feel Love but certainly not for the laborious and repetitive recording process that was required to achieve that sound: that process was alien to them. Several months in the studio later, along with Moroder drummer and big-hitter, Keith Forsey, Nº 1 In Heaven was ready to fly.

It wasn’t all a Moroder project / production though. The Mael brothers asked Tony Visconti, their old chum from Island records who’d produced their third album, Indiscreet, in 1975, to do the orchestration for this album. And let’s not forget Ron Mael’s keyboard talents either – not all synthesisers on this album were performed by Moroder but Ron Mael was very much learning on the job.

The album had mixed reviews on release and many die-hard Sparks hated it because “it was disco” and it was Moroder: the king of disco. But let’s look at the material at hand.

Tryouts For The Human Race

The 3rd charting (briefly) single and my personal favourite from the album. Starting with the syndrum, a signature of ‘70s disco music, and the “reminiscent of I Feel Love” synthesiser. Fade in a thumping bass and drum and we’re off and that bass line drives the melody all the way through. This track really demonstrates all the skills on show here and it’s hard to imagine this being written as opposed to being created in the studio. However, the lyrics are undoubtedly from Ron Mael’s bizarrely creative mind:

It’s about sperm; the determination, upon release (“one of us might make it through, the rest will disappear like dew”) to create life.

Picking up the pace at a rocketing 152bpm all the way through, this is another Ron Mael composition and I love its energy. There’s a hook all the way through this batted between to synths and Russell’s multi-layered vocals leave us with little clues as to what he’s singing about. Impressive. An instrumental mid-section is a flurry of drums, cymbals and synths – its frenetic and possibly an acquired taste.

If you think about the title of this track and its associations, you’re not wrong in guessing what this song is about. Again, the phrasing is archetypal Ron…

“I catch a cold
just by looking in your eyes”

It fades in gradually and very quickly gets to 144bpm and is overlaid with synthesisers, mostly from Moroder but you can hear keyboard riffs that are Ron’s. Signature Ron Mael.

Right from the start this track grabs you. The second single release, it’s penned by the brothers it’s about how we speed through life. Just imagine how that concept has changed and accelerated in the intervening four decades. It’s also a nudge for us to think about what we’ve done.

The bass line just gives me goose bumps and this was a dancefloor favourite in the summer of 1979 on both sides of the Atlantic. The repetitive background vocals

A great track and one that still appears here and there these days. Sometimes more so than the title track.

Moroder’s influence on this track is clear but it’s not all synthesiser tricks. The recording techniques are Moroder’s and the intro and almost bassline-hook type background of the cymbals all the way through are recorded and painstakingly laid down manually. Although heavily synthesised, including the use of vocoders, let’s not forget the skill needed to actually produce some of the sounds and the absolute precision of recording, rerecording and overdubbing.

The Number One Song in Heaven

The title track, first single release and really quite unique. Again we have a synthesised intro with soprano vocals and a fade in of bass line. Except in this case the frequency of the bass line means you can actually feel it in your stomach. It’s about religion and is in two parts. The initial part formed the b-side of the single and the more commercial second part was the a-side. It’s about religion and pop and it makes me smile. The whole album is perfectly sequenced yet I’ve often thought tracks 1 and 6 could be swapped round.


Clever marketing unfortunately didn’t help commercial sales of this album but vastly increased its cult status. PeterCook did a promo for album and he also had a hidden track on the 12” picture disc of Tryouts For The Human Race. The hidden track delighted guests (fans of Sparks) at our 1979 new year party.

Is it actually disco? Critics, the NME and Record Mirror and others from the music press and fanbase from 40 years ago disagreed [with each other] but listen to the melodies: they are classic Sparks, as are the lyrics as I’ve already noted. The lyrics and melodies are overlaid onto a dance / electronic background so no, I don’t regard this as a “disco” album. Neither did Sparks.

I mentioned the beats per minute (bpm) of a couple of tracks and this bears out the argument that the album is not a disco album. Not classically anyway because only 3 are really dance tracks – and those are the three single releases. Yes, I’m prepared to debate this but even for 1979 this album does not sound like a disco album.

It’s also worth a mention that at this time there were no electronic drum machines. Sure, they weren’t far off but all the drums are actually played and recorded live: hence the mention earlier of Keith Forsey.

Sparks had influence. New Order, Depeche Mode, The Human League and Erasure all made their love for the band known. However, they’ve also spread into less obvious quarters with the likes of Björk, Kurt Cobain and Thurston Moore expressing a deep love for them. And clearly, Franz Ferdinand who went on to collaborate with Sparks to create the wonderful FFS.

Writing, editing, reading and rereading this review I hadn’t decided on a track to actually feature with it: there’s a lot of material. However, this is one of my favourites and its Sparks at The Barbican performing The Number One Song In Heaven with a full orchestra. Enjoy!