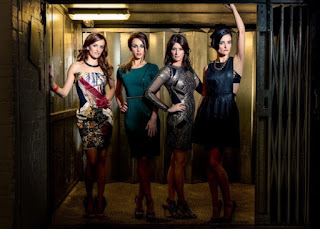 Yes, B*Witched have finally ditched the double denim to release a cover version of the Wilson Phillips song Hold On. Have a listen...

For those of you who need a reminder, B*Witched are twin sisters Edele & Keavy Lynch, (sisters of Boyzone's Shane), Lindsay Armaou and Sinead O’Carroll. Originally formed in 1997, the band had huge global success selling over 3 million albums worldwide and notching up four No. 1 UK hits with their first four singles, ‘C’est la Vie’, ‘Rollercoaster’, ‘To You I Belong’ and ‘Blame It On The Weatherman’ until their record label dropped them at the height of their early success.

Now, still basking in the limelight in the wake of their unprecedented Big Reunion tours, B*Witched have spent the last few years travelling the world, performing in various countries and promoting their critically acclaimed EP, Champagne or Guinness.

Their first release in 5 years, ‘Hold On’ brings with it the pop positivity which has been seriously lacking since we last heard from the girls. Singer Sinead says, “we love the empowerment we get when we perform this song live... and how uplifting the universal anthem ‘Hold On’ can be. It's definitely a moment when we feel we are all in sync with the crowd and fans.”

Accompanying clips from David Crowley’s film Aiysha, which recently picked up the audience award at the Vegas Movie Awards as well as ‘Outstanding Achievement’ at the Berlin Flash Film Festival, the song provides an uplifting and positive message to match this emotionally and romantically charged footage. Perfectly encapsulating the modern interpretation of witchcraft as feminist self-assurance and confidence, the footage concludes with a special message from the band themselves, encouraging anyone watching to “B* Brave, B* You, B* Loved. Love from, B* Witched.”