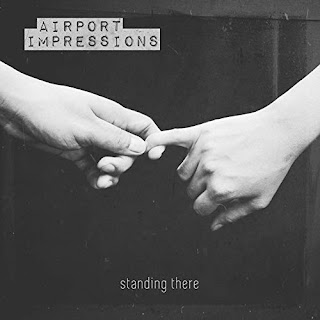 Susan Omand gets a good impression from the new sound of Airport Impressions and their latest single Standing There...

Way back in the mists of… wow, was it really almost four years ago?!... I found out about a band from Malta called Airport Impressions. I reviewed their latest album at the time (read that here) and I eagerly devoured their back catalogue, knowing that these guys were going to be huge as soon as the UK market got to hear about them. Well, time marched on I guess and no UK chart success was forthcoming, despite my best efforts at telling everyone I knew how good they were and how much I thought everyone would like them, and they kind of faded from my own radar, so it was a serendipitous surprise when I got pinged a message over Twitter this week about this “alt-rock band from Malta” and it turned out to be these guys!

Woo-hoo! Yes, Airport Impressions are back with a new single called Standing There. It’s billed as “essentially a love song and a thank you note to someone who is there to pick you up when you’re broken and beaten down by the hectic life we lead” but it’s by no means a slow, slushy or melancholic song. On the contrary, the uptempo beat and marvellously jangly guitars had my toes tapping and I found myself singing along with the hooky chorus after just one or two listens. It’s just fantastic! You can still really hear the Celtic influence in their music and, thankfully, that edge that I was worried about them losing is still very much there. What has changed though is that there is an added maturity to their music, without being too over-produced or having too many corners knocked off, and it will now very much appeal to fans of the current “grown-up singer/songwriter” boom while still not alienating the fans their rockier roots.

It does, of course, help that frontman Errol Sammut has “the look” and a voice that I could listen to all night anyway but the sound created depends just as much on the rest of the band, guitarist Ryan Magro, bassist Daniel Genuis (who also has the writing credit for this song - genius Genuis!) and drummer Daryl Curmi, as they now seem to have a great working chemistry that pulls them together in a way not often seen in other bands.

I can only hope that this new single means another album is on the way and that, this time round, the UK music stations, and listeners, will finally get on board with Airport Impressions.