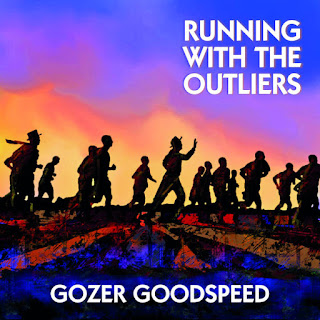 Today sees the release of Gozer Goodspeed's debut album, Running With the Outliers. Steve Taylor-Bryant gave it a listen...

I've liked Gozer Goodspeed’s music right from the start, long before this album was recorded, there was always something pleasant about his acoustic style that took me back to simpler times and happier memories. But you can’t live in the past, you have to survive today and, whilst I nagged him constantly for a drummer, I had no idea whether a bigger band sound would work or not for him because, well, I am a drummer.

I said in the recent review I wrote for the title track, and first single, from Running With the Outliers (read that here) that Gozer Goodspeed has elevated his game with the inclusion of a full band and, having now done a listen through to the entire album, I am sticking with that opinion. This is no longer acoustic folk from your local singer on a cold Friday evening, not that there is anything wrong with that, but with the production quality on this album, the use of a very talented group of musicians to compliment some wonderful song writing and his voice sounding somewhat more unique than previous EP’s, Gozer Goodspeed has now entered the big leagues. Running With the Outliers is an album that demands you listen to it, that cannot be categorised, as it’s no longer Folk Music as you know it. It has rock edges, dare I say pop moments, it’s arena large in effort and scope but intimate club in its emotional hit, it’s damn good is what I am trying to say.

The opening and title track is great as I have spoken about before, and Gambler’s Last Day, Pumas and Neon Signs, and King Point Marina are just as good. My only criticism of them, and it is very slight (and only mentioned because if I don’t criticise Gozer he will be unbearable to be around), is that they all sound like his EP’s but with a band added, all great and wonderful but not as new or as impactful as they could possibly have been. However, whatever money Gozer is charging for this album, it is worth it and much more for February Almost Broke Me, for the six minutes of bluesy gorgeousness that is This is the Pathway, and for by far the best track on the album, If Not Yourself, Who Do You Think Will Save You which, even now my reviewing duties are over, is on my daily playlist.

There is a real depth and gravitas to the songs and messages contained within this latest offering from Gozer Goodspeed alongside foot stompingly ridiculous levels of enjoyment to be had from listening. There is also proof that, in amongst all the plaudits, there is a talented musician who is not scared to take advice or criticism and move on, taking the beneficial and implementing them in a way that only he can to produce a remarkable debut album. I hate that I have to say this in public as he will lord this over me for eternity, but Bravo sir! Bravo indeed.


Running with the Outliers is out on all digital and streaming platforms November 15th. To directly support Gozer, you can buy the album from his Bandcamp HERE