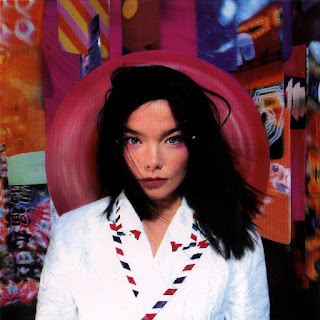 Steve Taylor-Bryant goes oh so quiet every time he listens to the Björk album Post...

Hypnotic. That’s the word to describe my liking of all things Björk. From the moment I press play on any album I’m hypnotised until the record finishes. As with most bands and artists,with the exception of Billy Joel whose entire back catalogue is exceptional, Björk has periods of time or releases that draw my attention more than others and it’s primarily the mid-1990’s and Post that I find myself going back to the most. There’s just something so special about Post and I’m not 100% sure what it is but, in my humble opinion, the album holds no weaknesses. It’s just one stunning song after another and it’s a genuine shame the album ends after three quarters of an hour because I could listen to Post era Björk all day.

Opening strongly with Army of Me which, if you take the video into consideration alongside the song, is sort of Nine Inch Nails-light meets Doctor Who on ecstasy which also sums up most of my own mid-1990’s period. Strong rhythms and effects matched only by Björk’s switch between almost out of time softness and snarling yet melodic warning in the vocal, there are not many albums that start at this superior level. Hyper-Ballad is up next with almost uncomfortable low range bass and brushed snare that snag you right you from the off, then you’re into a music box of orchestral undertones with a dance music topping and Hyper-Ballad is my previous hypnotic comment in music form. The Modern Things starts with Björk sounding the most Icelandic she has for a while and, with that beautiful little growl, she has followed by the high range notes is just wonderful and then we’re treated to what I can only describe as Acid Jazz I think because a more apt description is beyond me. Track four is our own Susan Omand’s nemesis song but one of my pleasurable listening experiences. Yes it’s time for It’s Oh So Quiet where the bizarre meets Big Band and fun is had by all... except Susan, the grump.

Heading into the halfway point we have Enjoy which is essentially industrial sounding dance music and I should hate it, but I don’t. That almost random beep, the distorted lyric, the ever pounding snare, I’m enraptured. You’ve Been Flirting Again sees us back to more orchestral softness and the listening is a pleasure, an utter pleasure. When the orchestra starts building but the vocal remains the same, the song transports you somewhere else. It’s melodic genius. It’s one of the most beautiful things I’ve ever had the honour to listen to. It also drifts into Isobel and that gorgeous trumpet really well and you get a slight breather before the jungle drums and distorted guitar start. Isobel is just a great example of what Björk is capable off, maybe having all the elements of a Björk creation in one song is too much for some people, not for me. And it’s so reminiscent of a Bond theme come the end it makes me wonder why we’ve not had a Bond/Björk collaboration yet*?

Possibly Maybe, that dial up internet come fax effect at the start just before the organ starts never fails to raise a smile. The song itself is more style mixes, a touch old movie siren, a touch Portishead, all Björk. Without doubt one of the best times on an album full of greatness. I Miss You is inescapably of its era with the dance beat and percussion but with an Eastern Europe instrument vibe over the top and more jungle drums leads you down an experimental path you didn’t know you wanted to journey down but will be so glad you did. Cover Me is another that won’t be for everyone, or Susan, but is just art school experience enough to work audibly. It’s the musical equivalent of painting your mind on canvas with your fingers. That description doesn’t do it justice but it’s what springs to mind first. Headphones is another that has that Cover Me vibe but also with quite an ominous undertone that gradually, and at two-plus minutes I mean gradually, builds into an amalgamation of all things Post. It really does feel like all the tracks played over the top of each other and yet singular and unique on its own merits. It’s a stunning way to end a stunning record.

* Editor's footnote - there is actually a cover of the Bond theme You Only Live Twice, done by Bjork for the album Cover Bond. You can listen to her version here.