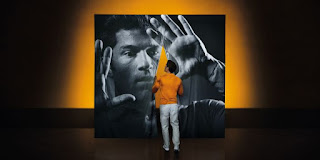 Based on the 1950 Jean Cocteau film of the same name, Glass’s mesmerising opera is directed by Netia Jones, making her ENO debut, and she combines live action and projection, including fragments of Cocteau’s celebrated film.

Netia said ‘Orphée is a mirror of a mirror, or a “mise-en-abîme” – an opera of a film of a play of a poem of an opera, in which everything reflects on something else.’

This new production of Orphée uses Cocteau’s film as a starting point, reflecting on Cocteau’s fascination with the mechanics and poetics of film, the life of the artist and ideas of success, failure, ambition, immortality and betrayal.

The production forms part of ENO’s Orpheus series, a reimagining of four operas exploring the Orpheus myth in autumn 2019. Each is interpreted by four directors from diverse theatrical disciplines, all in sets by renowned designer Lizzie Clachan.

Poet Orphée has become passé. Having lost his creative impetus, and becoming implicated in the death of the young and successful poet Cégeste, he becomes obsessed with achieving immortality. Though married to Eurydice, he falls in love with an enigmatic ‘Princess’ and moves between the worlds of the living and the dead. It is only after the Princess sacrifices herself to make Orphée immortal, that he and Eurydice can resume their life together.


Critically acclaimed Nicholas Lester takes the role of Orphée. His previous engagements for ENO were as Marcello in La bohème and Vicomte Cascada in The Merry Widow. He will be joined by another former Merry Widow cast member, Sarah Tynan. ENO favourite Sarah sings her second of two Eurydice roles this season, jumping straight in from a performance in Wayne McGregor’s season opener Orpheus and Eurydice, in which she delivered a performance ‘sung with shining clarity’ (Daily Telegraph).

Established star Nicky Spence joins the cast as Heurtebise, the Princess’s chauffeur. Nicky is a former ENO Harewood Artist whom ENO regulars will recognise as Sergeant Johnny Strong from the world premiere of Ian Bell’s Jack the Ripper: The Women of Whitechapel last season. Soprano Jennifer France makes her ENO debut as the Princess. Trained at the Royal Academy of Music, Jennifer was the recipient of the 2018 Critic’s Circle ‘Emerging Talent (Voice)’ Award.

Anthony Gregory sings Cégeste, combining his strong tenor with a critically praised timbre. The cast is completed by Clive Bayley as the Judge and Simon Shibambu as the Poet, whilst Rachael Lloyd is Aglaonice and William Morgan sings the Reporter.

Geoffrey Paterson conducts. Lighting design is by Lucy Carter and choreography is by Danielle Agami. Video and animation are by Lightmap. Netia Jones and Emma Jenkins have translated the libretto.

The live photographer is Cordula Treml.