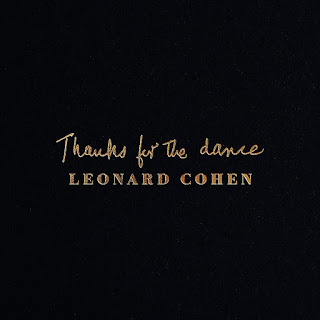 There's a new Leonard Cohen album out, and it's not a Best Of collection of b-sides, rarities, or live tracks...

Seven months after his father passed, Adam Cohen retreated to a converted garage in his backyard down the street from Leonard's house, to work with his father again, to stay in the company of his voice.

From their previous collaboration on You Want It Darker, the album which was released just before Leonard Cohen's death in 2016, there remained bare musical sketches, at times little more than vocals. Leonard had asked his son to bring these works to completion. Thanks For The Dance is that album, crafted by Leonard’s son, Adam, in accordance with his father’s final wishes and in partnership with some of his most enduring collaborators.

“In composing and arranging the music for his words, we chose his most characteristic musical signatures, in this way keeping him with us,” said Adam Cohen. “What moves me most about the album is the startled response of those who have heard it. ‘Leonard lives’! they say, one after the other.”

Listen to the beautifully dark The Hills, from the album.


In addition, a mini behind-the-scenes documentary, The Story of Thanks For The Dance, was created in collaboration with France's La Blogothèque team. Released in conjunction with the new album, the film includes interviews with producer Adam Cohen, engineer Michael Chaves and album contributors Leslie Feist, Daniel Lanois, Richard Reed Perry (Arcade Fire), Zac Rae (Death Cab For Cutie), Damien Rice and Patrick Watson. Each of those involved reflect on the journey, exploring their contributions and the meaning behind the album.

Here's that tracklisting in full.