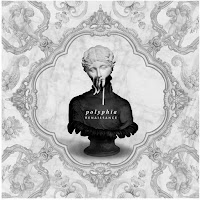 In an effort to further her musical education, Susan Omand has been set "homework" of listening to albums released after the 1980s that she has missed out on. This week she experiences a renaissance ...

As the first track of my latest homework album, Renaissance by Polyphia, started, it took my breath away. I was NOT expecting the full on orchestral intro to Culture Shock, which was absolutely stunning. For this to be followed by equally stunning guitar twiddling (as our great and glorious leader Steve would call it) it ensured the track laid a very solid foundation and I settled down to enjoy an interesting and exciting album, expecting great things.

Light is, as the name suggests, light and fluffy, although the riff did remind me a bit of We Didn’t Start the Fire. Again, there are very good guitar twiddlings with the addition of some very Level 42 sounding slap base. And that’s when I started to notice a pattern forming.

Florence is very pleasant, again with the twiddly guitar showing off and a solid bassline. Nightmare isn’t at all nightmarish, settling quickly into the same comfort zone as the rest of the tracks so far with, maybe, a slight darkening to the bass but nothing shocking or jarring. Storm tries its best to be stormy with more frenetic drumming but still manages to be a warm and comforting drizzle and Bittersweet was more sweet than bitter. Ivory is nice, Amour is nice, Crush and Euphoria are both nice too. Other than Culture Shock, the only tracks that sparked anything in me was the very short Symmetry which, ironically, took the balance away from the lead guitar for a couple of minutes, and Paradise which, when it started with piano, made me check that I was still listening to the same album.

So, yes, it’s a nice album and, yes, I’d probably go looking for more of their work if I needed something to listen to while I was doing something else. Because I think that’s the problem with this album for me; once you get over the ooooh and aahhhh of the amazing prog guitar skills of a very young band, that’s kind of all there is. The rest is all a bit too wallpapery ho hum to make much impact for me, very samey once you get into it. Don’t get me wrong, it really is great for having on in the background; it lulls, it comforts, it won’t offend your visitors and I really appreciate the lack of hollering vocals but, as an album, it doesn’t hold my interest or break into whatever else I’m doing enough for me to sit and pay it rapt attention. It didn’t live up to my expectations after the culture shock of Culture Shock. And that’s a real pity because Culture Shock as an album opener is brilliant.