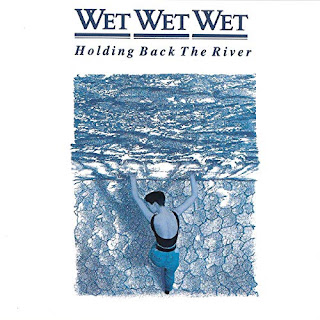 So many well-known albums turn 30 this year and Steve Taylor-Bryant and Susan Omand travel back to 1989 to revisit some of the sounds of their youth that made parents shout "Turn that noise down!" This week, Susan holds back on Holding Back the River...

Both Steve and I have written before about the Wets in our Turn That Noise Down articles, me with 1987's Popped In Souled Out and Steve with 1988's The Memphis Sessions so I guess it must be my turn again with my first listen to their third LP offering, and second studio album, Holding Back the River.

And it's just exactly what I'd expect a Wets album to sound like - mostly peppy and poppy with inbuilt grins all round. Of the nine tracks on the album, four of them were singles but, I must admit in my elderly haze, I only actually remember one of them doing anything spectacular in the charts - Sweet Surrender, which is also the first track on the album. Next up on the album, and another single, is Can't Stand the Night, which has a vaguely reggae feel to it lifting it above the generic soft pop rock that the band seemed to fall into around now. Blue For You is more interesting, with a Bond theme style to the orchestration under Pellow's vocal. Broke Away is another single from the album, I vaguely remember it now I listen to it again, and it's yer typical lighter-waver but with some interesting brass. A full on 80's pop synth blast comes next with You've Had It and it reminds me so much of the song Maniac from Flashdance (only, ironically, without the water).

I Wish comes next and it's a ballad that I think would sit well in the charts of today with all the singer/songwritery stuff coming from the likes of George Ezra and Ed Sheeran, if you toned down the Electric Dreams synth. Keys to Your Heart is different again, with a vaguely gospel feel and some decent brass and keyboard.

But then comes a complete surprise, and not necessarily a good one. What the hell were they thinking even attempting to cover Rod the Mod's anthem Maggie May?! Ghastly!! Moving swiftly on, we have the final track on the original album*, which is also the final single and the (almost) title track Hold Back the River. It's also easily my favourite on the album because of the jazzy, bluesy, new Orleans, end of the night feel. This is the track that shows off Pellow's voice the best and lights the way for his stage career to come.

* I mentioned that the title track was the last on the original album... that's because, on later CD and digital re-releases a hidden track was added, the B side to Sweet Surrender. If only the rest of the album had been this good... How The Hell Did That Get There?