Turn That Noise Down - The Psychedelic Furs 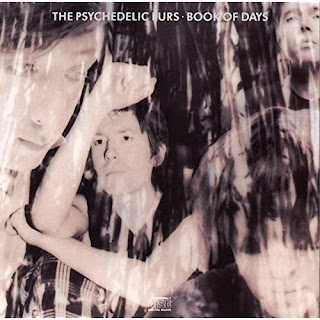 So many well-known albums turn 30 this year and Steve Taylor-Bryant and Susan Omand travel back to 1989 to revisit some of the sounds of their youth that made parents shout "Turn that noise down!" This week, Susan isn't Pretty in Pink...

I can’t be the only one to think that Psychedelic Furs were a one hit wonder with their 1981 song Pretty in Pink, which achieved chart success when it was re-recorded and used on the soundtrack of the 1986 film of the same name, am I? So, I must admit I was surprised when a whole album of theirs, Book of Days, appeared on our 30-year retrospective list and it DIDN’T have their hit song on it. Have they had more than one album? Erm, yes, it appears they have – Seven (and a greatest hits) in fact, of which Book of Days is number 6. And they’re apparently still a touring band, so I thought I’d better give this album a go.

If, like me, you liked Pretty in Pink, you’ll like the album because most of it is very much the same sound on all the tracks, just either speeded up or slowed down. Should God Forget sounds very like something from The Cure and the title track sounds very Smiths-like, but don’t hold that against it, there are no gladioli here. There’s jangly, often punky, guitars, thumping drums and the signature monotonous (as in all in near monotone, not boring) melody with the speaky/singing voice of front man Richard Butler undercut with the bright brass that you remember from Pretty in Pink. However, you do get the odd unusual instrument shining through, like the utterly beautiful cello on Torch. But really, on investigation, that shouldn’t have been a surprise as founding members of both The Waterboys and The Pogues (Anto Thistlethwaite and Jem Finer respectively) are listed in the session musicians on the album and you can definitely hear the influences once you know this.

Having listened to it a few times now, I must say that House is my favourite track and, rightly, it was chosen to be one of the two singles from the album. But I do defy you not to say “Isn’t she…” at the chorus…